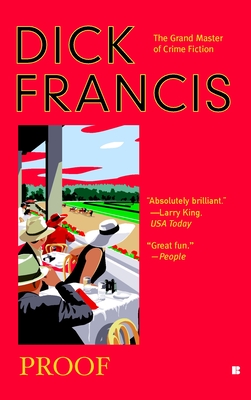 Wine merchant Tony Beach has expertly catered his latest society soiree, but the fun’s over when a team of hit men crash the party...literally. The event leaves Tony with a bitter aftertaste of suspicion—and sets off a mystery that’s an intoxicating blend of deception, intrigue, and murder.

“A mainline fix for Francis addicts...The novel is proof that the master has no lost his touch.”—The Nashville Banner

“[The] master of crime fiction and equine thrills.”—Newsday

“It’s either hard or impossible to read Mr. Francis without growing pleased with yourself: not only the thrill of vicarious competence imparted by the company of his heroes, but also the lore you collect as you go, feel like a field trip with the perfect guide.”—The New York Times Book Review

“A rare and magical talent...who never writes the same story twice...Few writers have maintained such a high standard of excellence for as long as Dick Francis.”—TheSan Diego Union-Tribune

“Few things are more convincing than Dick Francis at a full gallop.”—Chicago Tribune

Dick Francis was born in South Wales in 1920. He was a young rider of distinction winning awards and trophies at horse shows throughout the United Kingdom. At the outbreak of World War II he joined the Royal Air Force as a pilot, flying fighter and bomber aircraft including the Spitfire and Lancaster. He became one of the most successful postwar steeplechase jockeys, winning more than 350 races and riding for Her Majesty Queen Elizabeth, the Queen Mother. After his retirement from the saddle in 1957, he published an autobiography, The Sport of Queens, before going on to write more than forty acclaimed books. A three-time Edgar Award winner, he also received the prestigious Crime Writers’ Association’s Cartier Diamond Dagger, was named Grand Master by the Mystery Writers of America, and was awarded a CBE in the Queen’s Birthday Honours List in 2000. He died in February 2010, at age eighty-nine, and remains among the greatest thriller writers of all time.
Loading...
or support indie stores by buying on