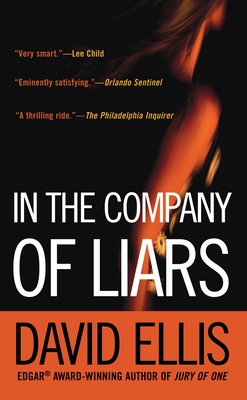 In the Company of Liars

A woman accused of murder is caught in a tortuous psychological maze that leaves her only one escape—suicide. Or does it? Told in reverse chronological order, from its enigmatic end to its brilliant beginning, In the Company of Liars is a tantalizing tour de force—a “compelling new novel of intrigue, murder, and terrorism” (The Philadelphia Inquirer).

Praise For In the Company of Liars: A Thriller…

“Edgar-winner Ellis takes some big chances in his fourth book, and he pulls them off in grand style. The Chicago trial lawyer branches out from his previous legal thrillers into a minefield of world terrorism and misplaced family loyalties, writing not only in the present tense but working backward from the death of his lead character, author Allison Pagone, who ostensibly kills herself after getting tangled up in a terrorist plot through her lover, a lawyer whom she’s suspected of murdering…This is another impressive performance from a writer who expands his ambition and artistry from book to book.”—Publishers Weekly

“Just when you thought there was nothing new a writer could do with the mystery genre, David Ellis decided to turn the formula upside-down and, yes, backward.”—Boston Herald

David Ellis is the author of seven novels, including Line of Vision for which he won the Edgar Award. An attorney from Chicago, he currently serves as Counsel to the Speaker of the Illinois House of Representatives and was recently appointed the Impeachment Prosecutor in the Blagojevich trial. Ellis lives in Springfield with his family.
Loading...
or
Not Currently Available for Direct Purchase