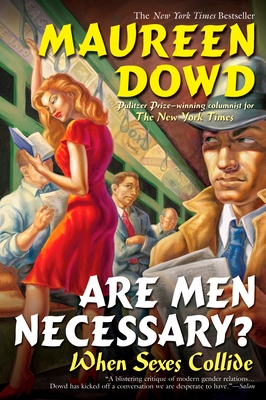 In this witty and wide-ranging book, Maureen Dowd looks at the state of the sexual union, raising bold questions and examining everything from economics and presidential politics to pop culture and the “why?” of the Y chromosome.

In our ever-changing culture where locker room talk has become the talk of the town, Are Men Necessary? will intrigue Dowd's devoted readers—and anyone trying to sort out the chaos that occurs when sexes collide.

Born in Washington, Maureen Dowd began her journalism career in 1974 as an editorial assistant for The Washington Star, where she later became a sports columnist, metropolitan reporter and feature writer. From there she went to Times magazine, then moved to The Times’s Washington bureau in 1986 to cover politics. She has covered seven presidential campaigns and served as a White House correspondent. In 1995 she became a columnist for The New York Times Op-Ed page and in 1999 won the Pulitzer Prize for distinguished commentary.

In addition to her two New York Times bestsellers, Bushworld and Are Men Necessary?, Dowd has written for GQ, Vanity Fair, Rolling Stone, The New Republic, Mademoiselle, Sports Illustrated and others.

Praise For Are Men Necessary?: When Sexes Collide…

“She'll keep you turning pages...Dowd has a voice that carries.”—People

“No one vets the culture with a keener eye than Dowd.”—Chicago Tribune

“Maureen Dowd has waded into the one topic more controversial than politics: sexual politics.”—Austin American-Statesman

“The New York Times columnist is dizzyingly well-read and well-rounded, with references from Oscar Wilde to Valley of the Dolls. My favorite part was when she casually flund the phrase 'as Carmen Miranda used to say' into a discussion of the Enron scandal...very lively...always entertaining.”—Chicago Sun-Times

“[Dowd] discusses sexual realities and absurdities, doing so with the same verve and nerve with which she handled the other hot-button topic—politics—in her 2004 bestseller, Bushworld...hilarious, cutting, and provocative.”—Booklist