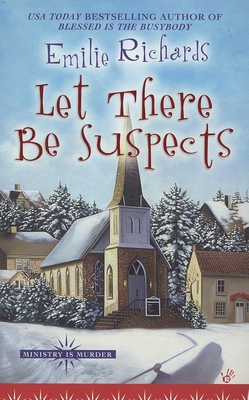 Let There Be Suspects (Ministry is Murder #2) (Mass Market)

From the USA TODAY bestselling author of Blessed is the Busybody comes a Christmas-themed Ministry is Murder Mystery.

Now that a chalk outline no longer marks their front porch, Aggie Sloan-Wilcox and her minister husband can turn their attention back to the living.

’Tis the season in bucolic Emerald Springs, Ohio. As a gift to her daughters, Aggie’s mom has invited their former foster sister, Ginger, to join their Christmas reunion. A potential candidate for Sociopaths Anonymous, Ginger could make Aggie nostalgic for the chalk line. But when Ginger turns up deader than a drumstick, Aggie’s sister is the logical suspect because she always resented her mother’s attachment to Ginger. Aggie knows her sister is incapable of murder. But that won’t convince the police. Now Aggie has to find the murderer—someone who's decided there's a loophole in thou shalt not kill.

Emilie Richards is the author of more than 70 novels. She frequently writes about relationships and finds a way to explore them in all of her works, which include When We Were Sisters, Woman Without a Name, The Color of Light, Whiskey Island, and Wedding Ring.
or support indie stores by buying on
Copyright © 2020 American Booksellers Association