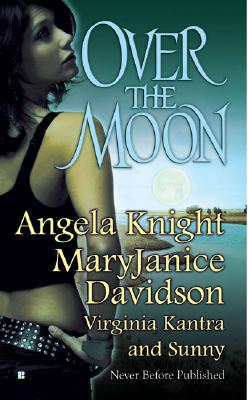 Over the Moon (Paperback)

Three bestselling superstars and one exciting new voice in paranormal romance in a hot new anthology.

When it comes to sexy werewolves, fairies, and magic, there's only one place for readers to go this winter: Over the Moon.

Angela Knight ventures to the borders of Mageverse, a land ruled by vampire knights.

MaryJanice Davidson returns to the wicked lair of the Wyndham werewolves.

And Sunny discovers a Mixed Blood Queen in command of a new realm.

Angela Knight is the USA Today bestselling author of the Mageverse series and the Warlord series for Berkley Books. She has also written for Red Sage, Changeling Press, Loose Id and Ellora's Cave. Besides her novels, Angela’s publishing career includes a stint as a comic book writer and ten years as a newspaper reporter. Several of her stories won South Carolina Press Association awards under her real name. Angela lives in South Carolina with her husband, Michael, a polygraph examiner and hostage negotiator for the county's Sheriff's Office.
MaryJanice Davidson is the New York Times bestselling author of the Undead novels featuring Betsy Taylor; Derik's Bane, and the new young adult novels featuring Jennifer Scales, written with her husband, Anthony Alongi, among other titles.

Bestselling author Virginia Kantra credits her love for strong heroes and courageous heroines to a childhood spent devouring fairy tales, her fondness for kickass women to her daughter, and her knowledge of guys to her husband and teenage sons.

Virginia is the author of over a dozen books for Silhouette Intimate Moments, including her popular "Trouble in Eden" series. Her first single title romantic suspense, Close-Up, will be released by Berkley in July 2005.