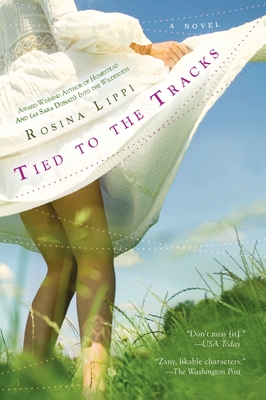 Tied to the Tracks

Angie Mangiamele runs a film company in Hoboken, New Jersey-a long way (in more ways than one) from Ogilvie, Georgia. But a new project has brought her to this small Southern town, where she stands out like a fire truck in a flower garden.

She's been invited to Ogilvie by Miss Zula Bragg, the intensely private literary legend who's agreed to appear in a documentary made by Angie's highly unconventional crew. And there's someone else in own Angie looks forward to seeing: John Grant, a descendant of Ogilvie's founders with whom she had a long-ago summer romance. But John's wedding-to the daughter of a prominent local family-is just days away, and promises to be the sleepy town's social event of the year.

What could possibly go right?

Rosina Lippi, a former linguistics professor, is the author of the critically acclaimed, award-winning literary novel Homestead, which won the 1999 PEN/Hemingway Award and was shortlisted for the 2001 Orange Prize. The New York Times Book Review called it "[A] novel of great depth, compassion, and tenderness." Under the name of Sara Donati, she has written the highly praised and commercially successful historical fiction series Into the Wilderness.
Loading...
or
Not Currently Available for Direct Purchase