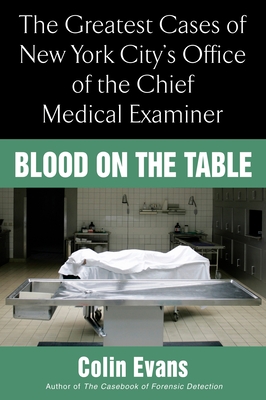 Blood On the Table

For almost a century, New York City's Office of the Chief Medical Examiner has presided over the dead. Over the years, the OCME has endured everything-political upheavals, ghastly murders, bloody gang wars, the 9/11 terrorist attacks, and non-stop battles for power and influence-and remains the final authority in cases of sudden, unexplained, or violent death.

Founded in 1918, the OCME has evolved over decades of technological triumphs and all-too human failure to its modern-day incarnation as the foremost forensics lab in the world, investigating an average caseload of over 15,000 suspicious deaths a year. This is the behind-the-scenes chronicle of public service and private vendettas, of blood in the streets and back-room bloodbaths, and of the criminal cases that made history and headlines.

Colin Evans is a veteran writer specializing in forensics. His books include The Casebook of Forensic Detection: How Science Solved 100 of the World's Most Baffling Crimes, and A Question of Evidence: The Casebook of Great Forensic Controversies from Napoleon to O.J. He resides in England.
Loading...
or
Not Currently Available for Direct Purchase