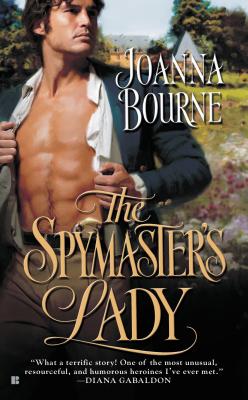 She's braved battlefields. She's stolen dispatches from under the noses of heads of state. She's played the worldly courtesan, the naive virgin, the refined British lady, even a Gypsy boy. But Annique Villiers, the elusive spy known as the Fox Cub, has finally met the one man she can't outwit.

Joanna Bourne is the award-winning author of Rogue Spy, The Black Hawk, The Forbidden Rose, My Lord and Spymaster, and The Spymaster's Lady. She has always loved reading and writing romance. She's drawn to Revolutionary and Napoleonic France and Regency England because, as she puts it, “It was a time of love and sacrifice, daring deeds, clashing ideals, and really cool clothing.” She's lived in seven different countries, including England and France, the settings of the Spymaster series. Joanna lives on a mountaintop in the Appalachians with her family, a peculiar cat, and an old brown country dog.

Praise for the novels of Joanna Bourne:

"Once in a while, during every reader's literary life, you encounter a book that reminds you why you are a reader. It renews your faith, if faith was lost; it rekindles your interest, if interest waned; and every word, every page, is a wonder.....Joanna Bourne is one of the best authors currently writing. If Ms. Bourne continues writing at such quality, she would deserve to be called one of the greatest romance authors ever. And I mean that." --All About Romance

"Books by [Joanna Bourne] are like a box of fine Laduree macaroons, not cheap junk food. They should be leisurely savored as the exquisite delicacies they are, for Bourne is a master wordsmith, able to charm, excite or break a reader’s heart with the stroke of her pen."--Dear Author
or support indie stores by buying on
Copyright © 2020 American Booksellers Association