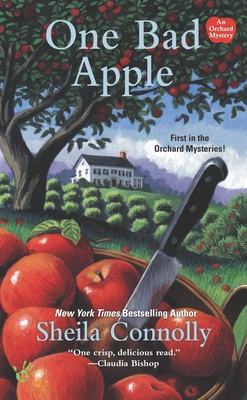 One Bad Apple (An Orchard Mystery #1)

There's a killer in the orchard-and he's rotten to the core.

Meg Corey has come to the quaint New England town of Granford, Massachusetts, to sell her mother's old colonial home and apple orchard. Instead, she becomes embroiled in development plans that include her land, and her former flame from Boston. When he's found dead in the new septic tank on her property, the police immediately suspect Meg, whose only ally in town is the plumber Seth Chapin. Together, they'll have to peel back the layers of secrecy that surround the deal in order to find the real murderer, and save the orchard.

Sheila Connolly is the New York Times bestselling, Anthony and Agatha award nominated author of the Orchard Mysteries, the Museum Mysteries, and the County Cork Mysteries. She has taught art history; structured and marketed municipal bonds for major cities; worked as a staff member on two statewide political campaigns; and served as a fundraiser for several nonprofit organizations. Sheila also managed her own consulting company, providing genealogical research services. In addition to genealogy, she loves restoring old houses, visiting cemeteries, and traveling. Now a full-time author, Sheila thinks writing mysteries is a lot more fun than any of her previous occupations. She is married and has one daughter and three cats.
Loading...
or support indie stores by buying on