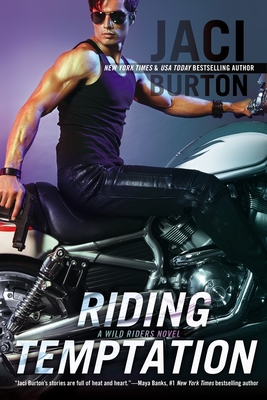 He’s a biker working undercover for the Feds. She joined the Wild Riders for reasons of her own. Together, they’re burning up the asphalt and tearing headlong into danger and passion…

Ever since runaway Jessie Matthews teamed up with the gang of special ops bikers, the guys of the Wild Riders have thought of her as their kid sister. Except for Diaz Delgado. Over the past few years he’s been watching the budding of a ripe young woman. Jessie’s glad somebody finally sees her for who she is—and she’s thrilled it’s Diaz. His dark good looks and killer body have tempted her since day one.

Diaz’s unbrotherly urges have been hard to fight but the last thing he’d want to do is hurt Jessie and break up the gang. But when they both go undercover to infiltrate a group of killer survivalists, he knows it’ll be hard to keep his distance—especially when the mission takes a risky turn. Now Diaz has no choice but to open himself up to the one woman who may be strong enough to take him on.

Jaci Burton is a USA Today and New York Times bestselling author who lives in Oklahoma with her husband and dogs. She has three grown children who are all scattered around the country having lives of their own. A lover of sports, Jaci can often tell what season it is by what sport is being played. She watches entirely too much television, including an unhealthy amount of reality TV. When she isn’t on deadline, which is often, Jaci can be found at her local casino, trying to become a millionaire (so far, no luck). Burton is the author of  the Play-by-Play series including The Perfect Play, Changing the Game, Taking a Shot, Playing to Win, Thrown by a Curve, One Sweet Ride, Melting the Ice, and Straddling the Line, and, with Lora Leigh, co-author of the anthologies Nauti and Wild and Nautier and Wilder.  She’s a total romantic and loves a story with a happily ever after, which you’ll find in all her books.
or support indie stores by buying on
Copyright © 2020 American Booksellers Association