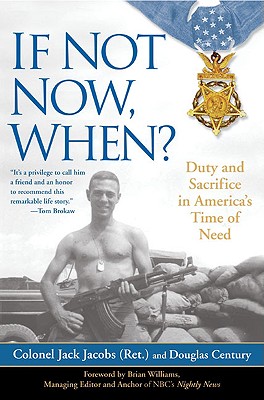 If Not Now, When?

Duty and Sacrifice in America's Time of Need

A Medal of Honor recipient looks back at his own service--and ahead to America's future.

Jack Jacobs was acting as an advisor to the South Vietnamese when he and his men came under devastating attack. Severely wounded, 1st Lt. Jacobs took command and withdrew the unit, returning again and again to the site of the attack to rescue more men, saving the lives of a U.S. advisor and thirteen Allied soldiers. Col. Jacobs received the nation's highest military award, the Medal of Honor.

Here, with candor, humor, and quiet modesty, Col. Jack Jacobs tells his stirring story of heroism, honor, and the personal code by which he has lived his life, and expounds with blunt honesty and insight his views on our contemporary world, and the nature and necessity of sacrifice.

If Not Now, When? is a compelling account of a unique life at both war and peace, and the all-too-often unexamined role of the citizenry in the service and defense of the Republic.