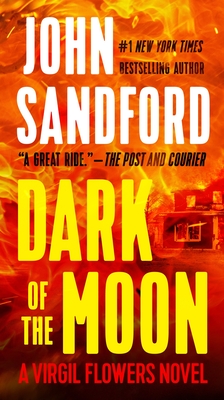 Dark of the Moon (A Virgil Flowers Novel #1)

“Virgil Flowers, introduced in bestseller Sandford’s Prey series, gets a chance to shine...The thrice-divorced, affable member of the Minnesota Bureau of Criminal Apprehension (BCA), who reports to Prey series hero Lucas Davenport, operates pretty much on his own..”*

He’s been doing the hard stuff for three years, but he’s never seen anything like this. In the small rural town of Bluestem, an old man is bound in his basement, doused with gasoline and set on fire. Three weeks before, a doctor and his wife were murdered. Three homicides in Bluestem in just as many weeks is unheard of. It’s also no coincidence. And it’s far from over...

Praise For Dark of the Moon (A Virgil Flowers Novel #1)…

“Sandford keeps the reader guessing and the pages turning while Flowers displays the kind of cool and folksy charm that might force Davenport to share the spotlight more often.”—*Publishers Weekly

“Flowers is a welcome addition to [Sandford’s] body of work.”—Chicago Sun-Times

“[Sandford] maintains the page-turning momentum that makes his novels such a treat. If you liked Lucas, you’ll love Virgil.”—The Tampa Tribune

“A book that will keep you turning pages, guessing, and completely immersed—and engrossed—in whatever Sandford wants to throw at you. It’s a great ride, and Sandford proves that sometimes it’s not the character, it’s not the series, it’s the writer.”—The Post and Courier

John Sandford is the pseudonym for the Pulitzer Prize–winning journalist John Camp. He is the author of twenty-six Prey novels (most recently Extreme Prey); four Kidd novels; eight Virgil Flowers novels; two YA novels coauthored with his wife, Michele Cook; and three other books, including Saturn Run. He lives in Santa Fe, New Mexico.
Loading...
or
Not Currently Available for Direct Purchase