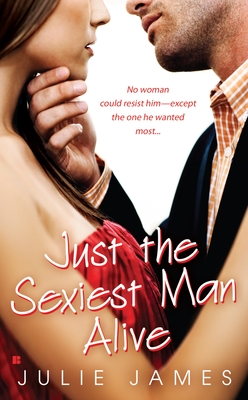 New York Times bestselling author Julie James’s debut novel—a dazzling romance about one of Hollywood's biggest movie stars and the woman who refuses to let him capture her heart...

Nothing fazes Taylor Donovan. In the courtroom, she never lets the opposition see her sweat. In her personal life, she never lets any man rattle her—not even her cheating ex-fiancé. So when she’s assigned to coach People’s “Sexiest Man Alive” for his next big legal drama, she refuses to fall for the Hollywood heartthrob’s charms.

Jason Andrews is used to having women fall at his feet. When Taylor Donovan gives him the cold shoulder, he’s thrown for a loop. She’s unlike any other woman he’s ever met: uninterested in the limelight, seemingly immune to his advances, and shockingly capable of saying no to him. She’s the perfect challenge. And the more she rejects him, the more he begins to realize she may just be his perfect match...

“If you've ever wondered what it is like having the Hollywood spotlight on you, this is the book to read. Each word and situation is lovingly crafted and is, happy to say, perfection....I'm jumping up and down here asking you not to miss this awesome novel that rightly deserves my Perfect 10 award.”—Romance Reviews Today

“Just the Sexiest Man Alive is witty, romantic, and so realistic I could have been there witnessing Taylor and Jason’s love story unfold. Julie James has a winning debut on her hands that is just an engaging delight to read.”—Joyfully Reviewed

“[James's] familiarity with both the law and the film industry lends credibility to this fast-moving, contemporary romantic comedy between two strong-willed characters.”—Booklist

“Even in the improbable world of Hollywood's top actors, Julie James introduces believable characters with real motivations behind their actions. With two witty and charming main characters, the dialogue is sure to keep the reader entertained.”—Fresh Fiction

“The sparks fly, hilarity is plentiful with all of the one-liners in the story, and underneath it all is a touching look at fame and fortune and how it can become the only reason people get close to a person. Just the Sexiest Man Alive is now residing on my ‘keeper’ shelf. Once you read the exploits of Taylor and Jason, you will feel the same way. Bravo, Ms James.”—Affaire de Coeur

“In her debut novel, James shakes up the world of lawyers and celebrity romance, producing a captivating, beautifully written story. The fireworks between the characters fuel the plot and will keep readers flipping the pages at a dizzying pace.”—RT Book Reviews

After graduating from law school, New York Times bestselling author Julie James clerked for the United States Court of Appeals. She then practiced law with one of the nation’s largest firms for several years until she began writing screenplays. After Hollywood producers optioned two of her scripts, she decided to leave the practice of law to write full-time. Julie’s books have been listed on the American Library Association’s Reading List for Top Genre Novels and Booklist’s Top 10 Romances of the Year, and have been featured as one of Cosmopolitan magazine’s Red-Hot Reads. They have been translated into seventeen languages. Julie lives with her husband and two children in Chicago, where she is currently working on her next book.
Loading...
or support indie stores by buying on
(This book is on backorder)