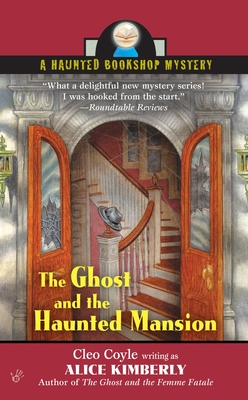 The Ghost and the Haunted Mansion (Haunted Bookshop Mystery #5)

When the local mailman inherits a haunted house and demands an exorcism, Pen must act fast to save her favorite ghost in this Haunted Bookshop mystery from New York Times bestselling author Cleo Coyle, writing as Alice Kimberly.

Bookshop owner Penelope Thornton-McClure didn’t believe in ghosts—until she met the spirit of hard-boiled 1940s detective Jack Shepard. And when Pen’s friend and mailman, Seymour Tarnish, gets into deep trouble, Pen not only believes in her ghost—she also thinks he can help...

An elderly lady of leisure has been found dead on posh Larchmont Avenue, her will recently, and suspiciously, revised to name Seymour as heir to her mansion. Just as eyes turn to him as the murderer—and Seymour gets busy settling into his ritzy digs—the mansion’s ghosts begin plaguing him. So he hires a team of parapsychologists to exorcise all the spirits from the town of Quindicott—and that includes Jack Shepard. Now Pen must act fast—because losing Jack scares Pen more than rattling chains and cold spots...

Praise for The Ghost and the Haunted Mansion

“Lighthearted and fun. The ghost of a gumshoe P.I. from the 1940s makes a unique and entertaining sidekick. Conversations between Penelope, a bookstore owner and amateur sleuth, and Jack's ghost keep the humor rolling.”—RT Book Reviews

“I love this series. Pen and Jack are such likeable characters.”—Spinetingler magazine

“Ms. Kimberly has penned a unique premise and cast of characters to hook us.”—Rendezvous

“[Jack] is hard boiled in the tradition of Phillip Marlowe and [Pen] is a genteel Miss Marple; yet the two opposites make an explosive combination.”—Midwest Book Review

“What a delightful new mystery series! I was hooked from the start.”—Roundtable Reviews

“Combining elements of cozy mysteries with detective noir, throwing in a bit of the paranormal, this is a series that will please any mystery fan.”—The Romance Reader's Connection

Cleo Coyle is a pseudonym for Alice Alfonsi, writing in collaboration with her husband, Marc Cerasini. Both are New York Times bestselling authors of the Coffeehouse Mysteries—now celebrating more than ten years in print. As Alice Kimberly, they also write the nationally bestselling Haunted Bookshop Mysteries. Alice has worked as a journalist in Washington, DC, and New York, and has written popular fiction for adults and children. A former magazine editor, Marc has authored espionage thrillers and nonfiction for adults and children. Alice and Marc are also bestselling media tie-in writers who have penned properties for Lucasfilm, NBC, Fox, Disney, Imagine, and MGM. They live and work in New York City, where they write independently and together.
Loading...
or support indie stores by buying on