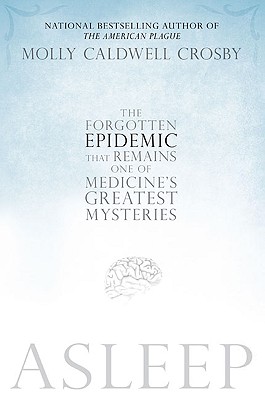 The Forgotten Epidemic that Remains One of Medicine's Greatest Mysteries

Another fascinating foray into medical history from the author of "The American Plague"
In 1918, a world war was raging, and a lethal strain of influenza was circling the globe. In the midst of all this death, a bizarre disease appeared in Europe. Eventually known as encephalitis lethargica, or sleeping sickness, it would spread across the world, leaving millions dead or locked in institutions.
Then, in 1927, it would disappear as suddenly as it had arrived-or so the doctors at first thought.
"Asleep," set in 1920s and '30s New York, follows a group of neurologists through hospitals and insane asylums as they try to solve this worldwide epidemic.
The symptoms could include not only unending sleep but dangerous insomnia, facial tics, catatonia, Parkinson's, and even violent insanity. Molly Caldwell Crosby, acclaimed author of "The American Plague," explores the frightening history of this forgotten disease- and details the frantic effort to conquer it before it strikes again.

Praise For Asleep: The Forgotten Epidemic that Remains One of Medicine's Greatest Mysteries…