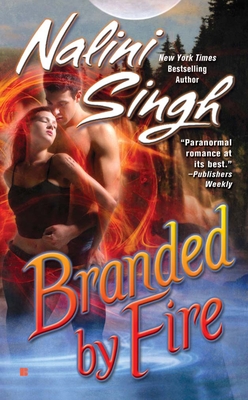 Branded by Fire (Psy-Changeling Novel, A #6)

Though DarkRiver sentinel Mercy is feeling the pressure to mate, she resists savagely when Riley Kincaid, a lieutenant from the SnowDancer pack, seeks to possess her. The problem is not simply that he pushes her buttons; the problem is that he’s a wolf, she’s a cat, and they’re both used to being on top.

But when a brilliant changeling researcher is kidnapped from DarkRiver territory in a seemingly senseless attack, Mercy and Riley must work together to track the young male—before his shadowy captors decide he’s no longer useful. Along the way, the two dominants may find that submitting to one another uncovers not just a deadly conspiracy, but a passion so raw, it’ll leave them both branded by fire…

Praise For Branded by Fire (Psy-Changeling Novel, A #6)…

"Nalini Singh continues to dazzle and ensnare new readers with each addition to the Psy/Changeling series."
-ROMANCE REVIEW

New York Times bestselling author Nalini Singh is passionate about writing. Though she’s traveled as far afield as the deserts of China, the Highlands of Scotland, and the temples of Japan, it is the journey of the imagination that fascinates her the most. She’s beyond delighted to be able to follow her dream as a writer.

Nalini lives and works in beautiful New Zealand. You can contact her directly through her website. While visiting the site, Nalini invites you to join her newsletter for up-to-date news about both the Psy-Changeling and Guild Hunter series, as well as fun exclusive extras, including free short stories set in her worlds.