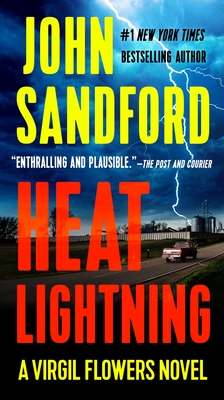 Virgil Flowers hunts a killer responsible for a strange string of murders in this thriller from #1 New York Times bestselling author John Sandford.

On a hot, humid summer night in Minnesota, Virgil Flowers gets a call from Lucas Davenport. A body has been found near a veterans’ memorial in Stillwater with two shots to the head and a lemon in his mouth—exactly like the body they found two weeks ago.

Working the murders, Flowers becomes convinced that someone is keeping a list—with many more names on it. And when he discovers what connects them all, he’s almost sorry. Because if it’s true, then this whole thing leads down a lot more trails than he thought it did—and every one of them is booby-trapped.

“Sandford returns to Flowers (and more than just a bit of Davenport, too) in Heat Lightning, and the ride’s another wild one.”—Richmond Times-Dispatch

“Features a colorful protagonist quite distinct from Davenport, and contains the usual snappy dialogue and suspenseful action.”—The Tennessean

“[A] fast-paced thriller...Flowers is a disarming and sometimes charming investigator. This book will appeal to readers of Sandford’s Prey series as well as fans of adventures like those by Lee Child.”—Library Journal

“Solid...Most readers will enjoy spending time in the company of the genial Flowers.”—Publishers Weekly