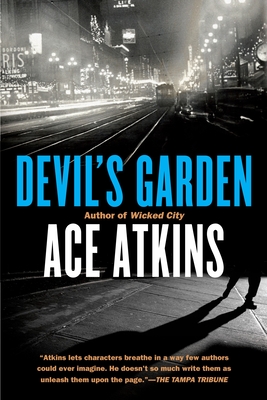 “Ace Atkins writing in the voice of Sam 'Dashiell' Hammett is a match made in heaven. All the elements of great noir are here: the fogs of San Francisco, the cold-hearted blond, and the crooked cops. To make the feat even more impressive, Atkins tackles the notorious case of Roscoe 'Fatty' Arbuckle and offers a very believable answer to what happened and why.”
— Ann Carlson, Harborwalk Books, Georgetown, SC
View the List

From the New York Times bestselling author of the Quinn Colson series comes a noir crime classic about one of the most notorious trials in American history.

The D.A. says it was Arbuckle who killed her—crushed her under his weight—and brings him up on manslaughter charges. William Randolph Hearst's newspapers stir up the public and demand a guilty verdict.

In desperation, Arbuckle's defense team hires an operative from the famed Pinkerton detective agency to investigate and, they hope, discover the truth. The agent's name is Dashiell Hammett... and what he discovers will change American legal history—and his own life—forever

“A remarkable book that succeeds on every level. As a riveting detective story, it is great entertainment. As a historical novel, it transports the reader. Atkins' prose, at once muscular and lyrical, is good from the first sentence to the last. He has solidified his place alongside Dennis Lehane and George Pelecanos as one of our most important literary crime novelists.”—San Francisco Chronicle

“With enviable ease, Atkins brings to life Hammett, Arbuckle, William Randolph Hearst and other real figures of the period. Those familiar with the historical case will be impressed by how well the book meshes fact and fiction. Genre fans who enjoy the grim realism of James Ellroy's post-WWII Los Angeles will find a lot to like in Atkins's Prohibition-era San Francisco.”—Publishers Weekly (starred review)

“Atkins artfully recreates California in the 1920s....An utterly engrossing mystery in which the getting there is as satisfying, if not more so, than the reveal.”—Historical Novel Society

“Atkins doesn’t just throw real-life facts into his novel; he skillfully weaves them into a suspense-laden story that serves as a look at the early film industry, an homage to Hammett and his Maltese Falcon, and a valentine to San Francisco of the 1920s. Even if Devil’s Garden has the reader racing to the Web to learn about the real case, Atkins’ gritty take on the era is riveting.”—The Baltimore Sun

Ace Atkins is the New York Times bestselling author of the Quinn Colson novels, the first two of which—The Ranger and The Lost Ones—were nominated for the Edgar Award for Best Novel (he also has a third Edgar nomination for his short story, “Last Fair Deal Gone Down”). In addition, he is the author of several New York Times bestselling novels in the continuation of Robert B. Parker’s Spenser series. Before turning to fiction, he was a correspondent for the St. Petersburg Times, a crime reporter for the Tampa Tribune, and, in college, played defensive end for the undefeated Auburn University football team (for which he was featured on the cover of Sports Illustrated). He lives in Oxford, Mississippi.
Loading...
or support indie stores by buying on
(This book is on backorder)