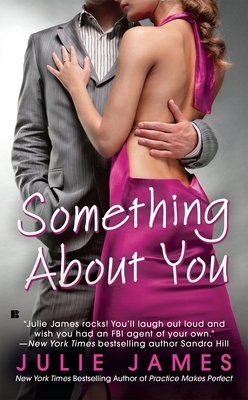 Something About You (An FBI/US Attorney Novel)

There's something about the New York Times bestselling Julie James...

FATE HAS THROWN TWO SWORN ENEMIES...
Of all the hotel rooms rented by all the adulterous politicians in Chicago, female Assistant U.S. Attorney Cameron Lynde had to choose the one next to 1308, where some hot-and-heavy lovemaking ends in bloodshed. And of all the FBI agents in Illinois, it had to be Special Agent Jack Pallas who gets assigned to this high-profile homicide. The same Jack Pallas who still blames Cameron for a botched crackdown three years ago—and nearly ruining his career…

…INTO EACH OTHER'S ARMS
Work with Cameron Lynde? Are they kidding? Maybe, Jack thinks, this is some kind of welcome-back prank after his stint away from Chicago. But it’s no joke: the pair is going to have to put their rocky past behind them and focus on the case at hand. That is, if they can cut back on the razor-sharp jibes—and smother the flame of their sizzling-hot sexual tension…

After graduating from the University of Illinois College of Law, Julie James clerked for the United States Court of Appeals in Jacksonville, Florida. She then practiced law with one of the nation's largest law firms for several years until she began writing screenplays. She now writes full time and lives in Chicago with her family.
Loading...
or
Not Currently Available for Direct Purchase