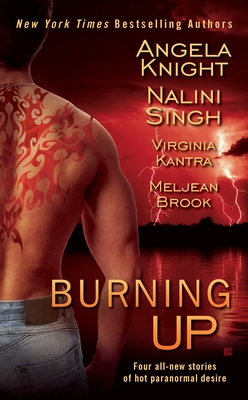 Bring these four authors together and it's sure to ignite a spark...

Angela Knight pairs a vampire warrior and his seductive captor in a battle against demonic predators.

Nalini Singh returns to the world of her Psy-Changeling series as a woman in lethal danger finds an unlikely protector-and lover.

Virginia Kantra continues the haunting tales of the Children of the Sea in her story of a wounded soldier rescued by an enigmatic young woman.

Meljean Brook launches a bold new steampunk series about a woman who strikes a provocative-and terrifying-bargain for freedom.

Angela Knight is the USA Today and New York Times bestselling author of the Mageverse series and the Warlord series. Besides her novels, Angela’s publishing career includes a stint as a comic book writer and ten years as a newspaper reporter. Several of her stories won South Carolina Press Association awards under her real name. She lives in South Carolina with her husband, Michael.

New York Times bestselling author Nalini Singh is passionate about writing. Though she’s traveled as far afield as the deserts of China, the Highlands of Scotland, and the frozen landscapes of Antarctica, it is the journey of the imagination that fascinates her most. She’s beyond delighted to be able to follow her dream as a writer. Nalini lives and works in beautiful New Zealand. You can contact her directly through her website. While visiting the site, Nalini invites you to join her newsletter for up-to-date news about both the Psy-Changeling and Guild Hunter series, as well as fun exclusive extras, including free short stories set in her worlds.

Virginia Kantra is the New York Times bestselling author of the Children of the Sea series and the Dare Island novels. She has won numerous industry awards, including the Romance Writers of America’s RITA Award and two National Readers’ Choice Awards.

Meljean Brook lives in Oregon with her family. She is the author of the Guardian series and the Iron Seas steampunk romance series.
Loading...
or support indie stores by buying on
(This book is on backorder)