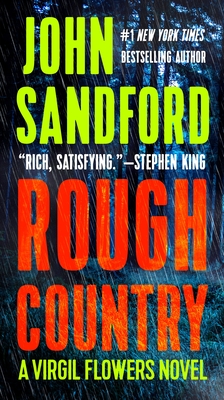 “John Sandford has again written a novel with very believable and intriguing characters. Virgil Flowers is a very different kettle of fish from Sandford's Lucas Davenport, but by the end of the first chapter of Rough Country I was swept into the fast-paced current of Sandford's writing.”
— Jennie Turner-Collins, Joseph-Beth Booksellers, Cincinnati, OH
View the List

The murder of a successful advertising executive leads Detective Virgil Flowers to the unlikely scene of the crime: a peaceful and bucolic wooded resort with as many suspects as it has secrets...

While competing in a fishing tournament in a remote area of northern Minnesota, Virgil Flowers receives a call from Lucas Davenport to investigate a brutal murder at a nearby resort for women only. As Virgil begins investigating, he finds a web of connections between the people at the resort, the victim, and some local women, notably a talented and popular country singer. The more Virgil digs, the more he discovers the arrows of suspicion point in many directions, encompassing a multitude of motivations: jealousy, blackmail, greed, anger, and fear.

Then Virgil discovers something that sends his investigation reeling. This is not the first murder connected to the Eagle Nest Lodge. Nor will it be the last...

“Unexpected twists...Sandford excels at all the required elements of the novelist: plot, personality, and prose. The melding is masterful and produces an exquisitely paced book at once beautiful and profane, a story that fans of both crime-novel approaches can enjoy. He makes Flowers as appealing and captivating a character as always. With a confident touch, Sandford brings it all home in Rough Country.”—Richmond Times-Dispatch

“An entertaining romp...Sandford has long been one of the best crime series mystery writers around. He keeps the pages turning and the dialogue snapping better than anyone this side of Elmore Leonard. An entertaining...and completely engrossing page-turner.”—The Post and Courier

“It’s a complicated case, but Virgil is up to the task, and, as always, he’s funny, smart, and tough when he needs to be.”—Publishers Weekly