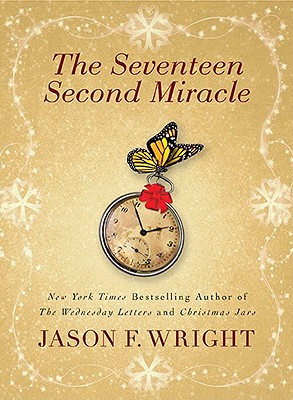 Cole Connor has become a patient teacher, and now he has invited three struggling teenagers to visit him on his front porch to learn about Rex Connor—and the Seventeen Second Miracle. Together they will learn how Rex Connor could have allowed seventeen seconds to destroy him, but instead he chose to live every day believing the smallest of acts could change the world for good. And the students, each with their own secrets and private pains, will begin to understand that even tragedy brings lessons. Even pain brings comfort. Even death brings miracles. A seventeen second miracle can change a life—if you let it.

Praise For The Seventeen Second Miracle…

"Celebrates the incredible joys of the human experience."
– Kevin Milne, author of The Nine Lessons

"Jason Wright's storytelling captures the reader's heart and draws them along on the journey to find forgiveness, acceptance and peace through this loving tale."
– Wichita Falls Times Record News

"The Cross Gardener is a quiet book with a quiet message of hope…Wright is to be commended for his passion and commitment to his subject."
– Deseret News

Why do you think most people blame Rex for Flick’s drowning? Do you think that is a fair assessment? Why or why not?

Losing a child is an emotional hardship. Do you think Flick’s mother was so unforgiving of Rex because she thought he could have prevented Flick’s death, or is there something more to her ire?

Forgiveness can be a slow process. Discuss why Sparks and Rex stay together even after everything that’s happened in their relationship, and to her family. Did you ever doubt they would be able to make their relationship work?

Why do you think Sparks was so quick to forgive Rex and help him heal?

Jade and Cole cannot have children and Jade had become “defeated with God.” At one point, Jade says “I won’t feel sorry for myself and blame God. I won’t. I’ll just live a different life than the one I dreamed of” (p 114 manuscript). Discuss how this tests their faith and marriage.

Rex “knew no strangers” (p 128 manuscript). How does this work in context with his life’s work in performing, witnessing, and collecting seventeen-second miracle?

Would you consider the incident with Travis on the Mall a “failed miracle?” Why or why not? Are there other examples throughout the novel where the characters are confronted with a “failed miracle,” only to have their faith see them through?

At the end of chapter 31, Cole says, “I retrieved Travis’s watch. It worked, but it was badly beaten” (pg 152 manuscript). How is this symbolic of what just happened in the story? Were Travis’s actions toward Cole justified after the incident?

Why do you think Jade is willing to give up Paper Gems if they can’t arrest the arsonist? How does this exemplify the type of person she is?

As an apology to Jade, Cole buys three dozen roses and tucks a card into each vase, telling her to open them in any order. Discuss the symbolism and significance of the order in which she opens them: “You. I. Love.”

Cole and Jade fight on their honeymoon because Cole is performing a miracle after Jade asks him not to get involved. Is it ever possible for a miracle to be detrimental?

At one point, Cole contemplates that his father “raised me in seventeen second miracles.” Do you think there is any truth to this statement?

Do you think that Cole was better prepared for the Discussions by not following in his father’s footsteps? Why or why not?

Discuss the difference between “being good” and “goody-goody” (pg 226 manuscript) in the context of the story and Rex’s life.

Have you ever performed or experienced a seventeen second miracle?