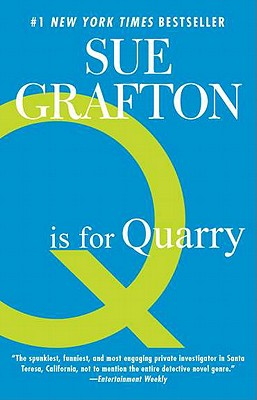 Q is for Quarry

She was a "Jane Doe," an unidentified white female whose decomposed body was discovered near a quarry off California's Highway 1. The case fell to the Santa Teresa County Sheriff's Department, but the detectives had little to go on. The woman was young, her hands were bound with a length of wire, there were multiple stab wounds, and her throat had been slashed. After months of investigation, the murder remained unsolved...

That was eighteen years ago. Now the two men who found the body are nearing the end of their careers in law enforcement—and they want one last shot at the case. Old and ill, they need someone to help with their legwork and they turn to Kinsey Millhone.

Kinsey is intrigued by the cold case and agrees to take the job. But revisiting the past can be a dangerous business, and what begins with the pursuit of Jane Doe's real identity ends in a high-risk hunt for her killer.

Praise For Q is for Quarry: A Kinsey Millhone Novel…

"Q Is for Quarry provides more insight into the detective's convoluted family relationships than any of Grafton's previous novels, and it's a cracking good story, as well." —Bookpage

"Grafton weaves an intriguing story, convincing in detail and satisfying in development. Still, what lifts this above the crowd is the character of her protagonist, Kinsey Millhone, who rings true both as a detective and as a woman." —The San Diego Tribune

"Starring affable private eye Kinsey Milhone, Q is quintessential Grafton. It is so well-written that many readers might consider it one of her best." —USA Today

#1 New York Times bestselling author Sue Grafton first introduced Kinsey Millhone in the Alphabet Series in 1982. Soon after, both writer and heroine became icons and international bestsellers. Ms. Grafton was a writer who consistently broke the bonds of genre while never writing the same book twice. Named a Grand Master by the Mystery Writers of America, her awards and honors included the Lifetime Achievement Award from the Private Eye Writers of America, the Ross Macdonald Literary Award, the Cartier Diamond Dagger Award from Britain's Crime Writers' Association, the Lifetime Achievement Award from Malice Domestic, a Lifetime Achievement Award from Bouchercon, three Shamus Awards, and three Anthony Awards—including the first two ever awarded. She passed away in December 2017.
Loading...
or
Not Currently Available for Direct Purchase