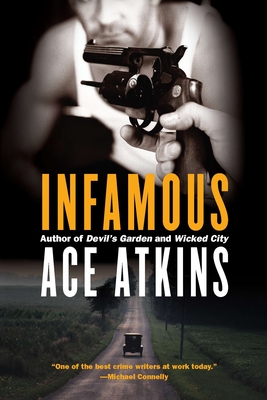 From the New York Times bestselling author of the Quinn Colson series comes a fast, funny, violent noir novel based on the crimes of George “Machine Gun” Kelly.

In July 1933, a gangster staged the kidnapping-for-ransom of an Oklahoma oilman. He would live to regret it. What started clean soon turns messy as two of “Machine Gun” Kelly's partners cut themselves into the action, a determined former Texas Ranger makes tracking Kelly his mission, and his wife, ever alert to her own self-interest, starts playing both sides...

Set in the first days of the modern FBI, Infamous is a passionate blend of historical novel and crime story featuring an unexpected hero, some of the most colorful supporting characters in recent crime fiction, and unforgettable femme fatale Kathryn Kelly—the Lady Macbeth of Depression-era crime.

“In his compulsively readable latest, Atkins takes a revisionist look at the life and times of Machine Gun Kelly and the very bad woman who stood behind him....Bullets fly, gore puddles and, as the denouement approaches, oh how those pages turn. Atkins, who loves his characters colorful, makes readers love them too, and it doesn’t much matter whether they’re naughty or nice.”—Kirkus Reviews

“Atkins brings to vivid life the henpecked George and the bloodthirsty Kathryn as he convincingly conjures up a past era. Not just for crime fans, this should appeal to a wide readership.”—Publishers Weekly

“It’s Atkins’ prodigious research that makes this novel a compelling road trip through Depression-era America. He vividly portrays the Dust Bowl, foreclosures, the grinding poverty, gnawing hunger, desperation, and the rage at bankers (most of which resonate in today’s America); and he captures the imminent end of the gangsters’ heyday. Like many fine historical crime novels, Infamous offers a window on society, then and now.”—Booklist