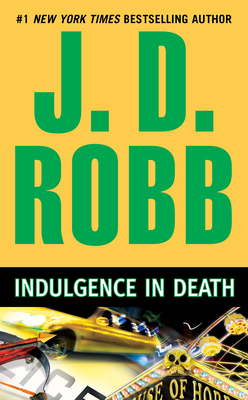 NYPSD Lieutenant Eve Dallas must discover who’s preying on those who cater to the rich and famous in this thriller in the #1 New York Times bestselling In Death series.

When a murder disrupts the Irish vacation she is taking with her husband, Roarke, Eve realizes that no place is safe—not an Irish wood or the streets of the manic city she calls home. But nothing prepares her for what she discovers upon her return to the cop shop in New York...

A limo driver is shot through the neck with a crossbow. Then a high-priced escort is found stabbed through the heart with a bayonet. Eve begins to fear that she has come across that most dangerous of criminal, a thrill-killer, but one with a taste for the finer things in life—and death.

As time runs out on another innocent victim’s life, Eve’s investigation will take her into the rarified circle that her husband Roarke travels in—and into the perverted heart of madness...

Praise For Indulgence in Death…

“Indulgence In Death is vintage J. D. Robb, hitting on every aspect that makes this series so popular.—New York Journal of Books

“Lt. Eve Dallas takes on a twisted game in the newest installment of Robb’s long-running and continually captivating series. Multifaceted characters and their ongoing evolution have kept readers glued to the pages of this series. The villains in this tale are true sociopaths with a sense of entitlement that showcases the worst of human nature.”—RT Book Reviews