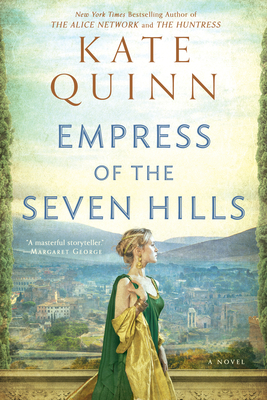 A tale of love, power and intrigue from the New York Times and USA Today bestselling author of The Alice Network and The Diamond Eye.

Powerful, prosperous, and expanding ever farther into the untamed world, the Roman Empire has reached its peak under the rule of the beloved Emperor Trajan. But neither he nor his reign can last forever...

Brash and headstrong, Vix is a celebrated ex-gladiator returned to Rome to make his fortune. The sinuous, elusive Sabina is a senator's daughter who craves adventure. Sometimes lovers, sometimes enemies, Vix and Sabina are united by their devotion to Trajan.

But others are already maneuvering in the shadows. Trajan's ambitious Empress has her own plans for Sabina. And the aristocratic politician Hadrian—who is both the Empress's ruthless protégé and Vix's mortal enemy—has ambitions he confesses to no one, ambitions rooted in a secret prophecy.

When Trajan falls, they all will be caught in a deadly whirlwind that may seal their fates, and that of the entire Roman Empire...

Praise For Empress of the Seven Hills (Empress of Rome #3)…

Praise for Empress of the Seven Hills

“The lives of an ambitious soldier, a patrician heiress and a future emperor fatefully intersect...Quinn handles Imperial Rome with panache.”—Kirkus Reviews

“[An] epic, sexy romp—the long-awaited sequel to Daughters of Rome...Readers will delight in the depictions of historical figures like Hadrian and Trajan, as well as the engrossing and dramatic relationships that drive this entertaining story.”—Publishers Weekly (starred review)

Kate Quinn is a native of Southern California. She attended Boston University, where she earned a bachelor's and master's degree in Classical Voice. A lifelong history buff, she has written four novels in the Empress of Rome Saga and two Novels of the Borgias, before moving to the twentieth century with The Alice Network and The Huntress. All her books have been translated into multiple languages.
Loading...
or support indie stores by buying on