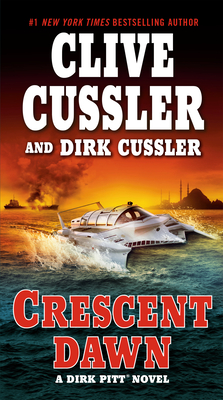 Deep sea explorer and NUMA director Dirk Pitt encounters the last direct descendants of the Ottoman dynasty as they prepair to incite a revolution in this novel in the #1 New York Times-bestselling series.

In a.d. 327, a Roman galley with an extraordinary cargo barely escapes a pirate attack. In 1916, a British warship mysteriously explodes in the middle of the North Sea. In the present day, a cluster of important mosques in Turkey and Egypt are wracked by explosions.

What ties them all together? NUMA director Dirk Pitt and his team are about to find out, as Roman artifacts discovered in Turkey and Israel unnervingly connect to the rise of a fundamentalist movement determined to restore the glory of the Ottoman Empire. From Washington to London to the treacherous shores of the Near East, dangerous men and desperate acts fill their path, and at the end of it, the most dangerous thing of all: the rumored existence of a mysterious “manifest,” lost long ago, which if discovered again could shed new light on early Christianity and just might change the history of the world as we know it.

Filled with breathtaking suspense and extraordinary imagination, Crescent Dawn is further proof that when it comes to adventure writing, nobody beats Clive Cussler.

“The action runs nonstop and whambam....And Crescent Dawn has a twist that writers like Tom Clancy have never used.”—St. Louis Post-Dispatch


Dirk Cussler is the coauthor with Clive Cussler of six previous Dirk Pitt® adventures: Black Wind, Treasure of Khan, Arctic Drift, Crescent Dawn, Poseidon’s Arrow,  Havana Storm, and Odessa Sea. For the past several years, he has been an active participant and partner in his father’s NUMA expeditions and has served as president of the NUMA® advisory board of trustees. Cussler lives in Arizona.
Loading...
or support indie stores by buying on