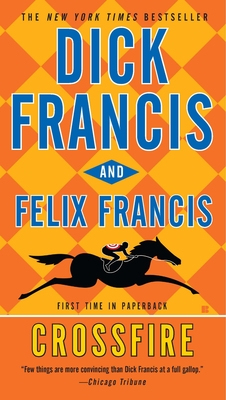 Shell-shocked after losing a foot during his tour in Afghanistan, Captain Tom Forsyth returns to his estranged mother's house. His mother has always put horses first and family last. But now she's being blackmailed for a hefty sum every week and being forced to make her horses lose. Using the skills he honed in the military, Tom sets out to find and defeat a hidden enemy before his mother's reputation is ruined, and he ends up back in the crossfire.

Dick Francis was born in South Wales in 1920. He was a young rider of distinction winning awards and trophies at horse shows throughout the United Kingdom. At the outbreak of World War II he joined the Royal Air Force as a pilot, flying fighter and bomber aircraft including the Spitfire and Lancaster.

He became one of the most successful postwar steeplechase jockeys, winning more than 350 races and riding for Her Majesty Queen Elizabeth, the Queen Mother. After his retirement from the saddle in 1957, he published an autobiography, The Sport of Queens, before going on to write more than forty acclaimed books.

Felix Francis, a graduate of London University, spent seventeen years teaching A-level physics before taking on an active role in his father’s career. He has assisted with the research of many of the Dick Francis novels, including Shattered, Under Orders, and Twice Shy, which drew on Felix’s experiences as a physics teacher and as an international marksman. He is coauthor with his father of the New York Times bestsellers Dead Heat, Silks, and Even Money. He lives in England.
Loading...
or support indie stores by buying on