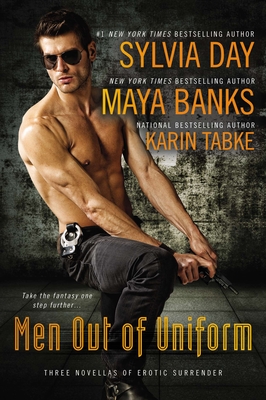 Men Out of Uniform (Paperback)

They may enforce the rules, but when men in uniform are off duty and under the covers, they're experts at breaking them. After all, the hottest thing about a man in uniform is imagining him out of it...

In Maya Banks’s “Soul Possession,” Jessie spends a hot night with two sexy-as-sin detectives, only to be accused of murder the very next day. But when Jessie becomes the target of a serial killer, her two detectives will risk everything to have her back in their arms—and in their bed...

It’s time for protected witness Layla Creed to come out of hiding and take the stand in “Taking the Heat” by Sylvia Day. Layla has only three days to reconnect with federal marshal Brian Simmons—and slake the white-hot lust that has simmered between them for years...

Karin Tabke’s “Wanted” follows the X-rated exploits of bad-boy cop Colin Daniels and the soon-to-be-ex-wife of a mob boss. He’s been hired to guard her body, but it drives him to distraction instead, putting his career—and his life—on the line...

Sylvia Day is the #1 New York Times and #1 international bestselling author of over 20 award-winning novels sold in more than 42 countries. She is a #1 bestselling author in 28 countries, with over 18 million copies sold. Her Crossfire series has been optioned for television by Lionsgate. Visit Sylvia at sylviaday.com, Facebook.com/AuthorSylviaDay, and on Twitter @SylDay.

Karin Tabke is a full-time writer who draws on a lifetime of stories and backdrops that few outside of the law enforcement community ever hear about, let alone see. She is the author of the Blood Law series.

“This entertaining anthology will summon memories of your favorite car chase movie, with the good guys trying to catch the bad, using any mode of transportation available. Fast-paced and exciting, it has a little something for every taste.”—RT Book Reviews
or support indie stores by buying on
Copyright © 2020 American Booksellers Association