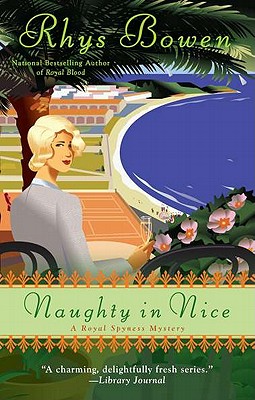 The national bestselling author of "Royal Blood" whisks her heroine away to the French Riviera for fun-and danger.

Lady Georgiana Rannoch has once again been called into service by Her Majesty the Queen. This time she's sent to Nice on a secret assignment that's nothing to sneeze at-recover the Queen's stolen snuff box.

As much of an honor as it is to be trusted by Her Majesty, an even greater honor awaits Georgie in Nice-as Coco Chanel herself asks Georgie to model her latest fashion. But when a necklace belonging to the Queen is stolen on the catwalk, Georgie has to find two priceless items-and solve a murder. How's a girl to find any time to go to the casino?


Praise For Naughty In Nice…

"Georgie's latest adventure is charming and lighthearted as ever, though the 1930s setting carries ominous hints of the future."
--Kirkus Reviews

"It's another delightful, unmissable installment in the Royal Spyness series. Bowen captures the cheeky humor and charm of the Lost Generation, ladling in a healthy dose of dry British wit and fundamental common sense."
--Romantic Times

"The best part of this delicious series is the cast of characters (well known and otherwise), led, of course, by the level-headed and stiff- upper-lipped Georgiana, who tackles whatever is in front of her, be it murder or romance, with uncommon relish. A royal romp."
--Booklist

Rhys Bowen has been nominated for every major mystery award, and has won seven. She lives in California.
or
Not Currently Available for Direct Purchase