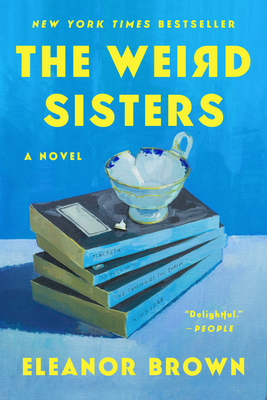 “The sisters in this funny and touching book are not 'weird' in the modern sense of the word; the title refers to the three witches in Shakespeare's Macbeth. Headed by a father who was a professor of Shakespeare and his loving wife, the Andreas family was certainly unusual, and the three daughters grew up speaking in couplets, quoting Hamlet, and reading constantly. When their mother develops breast cancer, all three sisters return to their Midwestern home to aid in her care -- and end up caring for each other as well. This is a wonderful tribute to literature, the bonds of sisterhood, and the importance of family.”
— Ellen Burns, Books On The Common, Ridgefield, CT
View the List

“The sisters in this funny and touching book are not 'weird' in the modern sense of the word; the title refers to the three witches in Shakespeare's Macbeth. Headed by a father who was a professor of Shakespeare and his loving wife, the Adreas family was certainly unusual, and the three daughters grew up speaking in couplets, quoting Hamlet, and reading constantly. When their mother develops breast cancer, all three sisters return to their Midwestern home to aid in her care - and end up caring for each other as well. This is a wonderful tribute to literature, the bonds of sisterhood, and the importance of family.”
— Ellen Burns, Books On The Common, Ridgefield, CT
View the List

The beloved New York Times bestseller from acclaimed author Eleanor Brown about three sisters who love each other, but just don't happen to like each other very much.

Three sisters have returned to their childhood home, reuniting the eccentric Andreas family. Here, books are a passion (there is no problem a library card can't solve) and TV is something other people watch. Their father—a professor of Shakespeare who speaks almost exclusively in verse—named them after the Bard's heroines. It's a lot to live up to.

The sisters each have a hard time communicating with their parents and their lovers, but especially with one another. What can the shy homebody eldest sister, the fast-living middle child, and the bohemian youngest sibling have in common? Only that none has found life to be what was expected; and now, faced with their parents' frailty and their own personal disappointments, not even a book can solve what ails them...

Praise For The Weird Sisters…

Praise for The Weird Sisters

“At once hilarious, thought-provoking, and poignant, this sparkling and devourable debut explores the roles that we play with our siblings, whether we want to or not. The Weird Sisters is a tale of the complex family ties that threaten to pull us apart, but sometimes draw us together instead.”—J. Courtney Sullivan, author of Friends and Strangers

“Even if you don’t have a sister, you may feel like you have one after reading this hilarious and utterly winsome novel. Eleanor Brown skillfully ties and then unties the Gordian knot of sisterhood, writing with such knowingness that when the ending came, and the three Andreas sisters--who had slunk home for a rest from themselves only to find to their horror their other two sisters there as well--emerge, I sighed the guilty sigh of pleasure and yes, of recognition.”—Sarah Blake, author of The Guest Book

“Get thee to a bookstore....Brown is such a clever writer, and she’s written such an endearing story about sisterly affection and the possibilities of redemption, that it’s easy to recommend The Weird Sisters. Take Polonius’s good advice and ‘read on this book.’”—The Washington Post

“Delightful…Brown doesn’t make things easy on herself. She bestows distinct traces of prickliness, self-obsession, and irresponsibility on her women. They’re not storybook heroines but as susceptible to bad behavior as any of us. And she uses a first-person plural narrator—a collective we that speaks for every sister yet not any specific one—with a scope wide enough to view their inner turmoil and outer mistakes with wry understanding. The trick could have failed, yet it somehow doesn’t and pulls us into the heart of the family circle….That’s Brown’s great gift: She draws you in and makes you believe her weird sisters aren’t so weird after all.”—The Miami Herald

“Brown writes sweetly of the transition so many adults struggle to make before their parents’ eyes, from children to caretakers themselves.”—The Cleveland Plain Dealer

“[A] fine debut novel...[Brown] has a crisp style and a flair for dialogue.”—The Columbus Dispatch

“Delightful and fascinating....A magnificent tapestry of a tale.”—The Sacramento Bee

“[A] charming debut novel…cleverly written from the sisters’ perspective...Though the book is named after witches in the play Macbeth, you need not be a Shakespeare scholar to fall in love with this feel-good story—or the bewitching sisters.”—Woman’s Day

“A page-turner from the start.”—Ladies’ Home Journal

“You don’t have to have a sister or be a fan of the Bard to love Brow’s bright, literate debut….The supporting cast—removed, erudite dad; ailing mom; a crew of locals; Rose’s long-suffering fiancé—is a punchy delight, but the stage clearly belongs to the sisters; Macbeth’s witches would be proud of the toil and trouble they stir up.”—Publishers Weekly (starred review)

“Lovely…This novel should appeal to Shakespeare lovers, bibliophiles, fans of novels in academic settings, and stories of sisterhood. The narration is a creative and original blending of the three ‘Weird Sisters’ as one.”—Library Journal

“There are no false steps in this debut novel: The humor, lyricism, and realism characterizing this lovely book will appeal to fans of good modern fiction.”—Booklist

“What a joy to read. What a VOICE. The Weird Sisters is family drama dissected by verbal scalpel. If with and language could protect against growing old, these bewitching sisters might never have to grow up.”—Helen Simonson, author of Major Pettigrew’s Last Stand

Eleanor Brown is the New York Times bestselling author of the novels Any Other Family, The Weird Sisters and The Light of Paris, and the editor of the anthology A Paris All Your Own. She lives with her family in Colorado.

The Andreas family is dedicated to books, particularly Shakespeare. Would the family be different if their father were an expert on a different writer? Edgar Allan Poe, let’s say, or Mark Twain? What if they were a family of musicians or athletes, rather than readers? How might that change their dynamic? Is there an interest that unites your family in the same way that reading unites the Andreas family?

The narration is omniscient first person plural (“we” rather than “I”). Why do you think the author chose to write the novel in this way? Did you like it?

Which sister is your favorite? Why? Which sister do you most identify with? Are they the same character?

Each of the sisters has a feeling of failure about where she is in her life and an uncertainty about her position as a grown-up. Are there certain markers that make you an adult, and if so, what are they?

In what ways are the sisters’ problems of their own making? Does this make them more or less sympathetic?

The narrator says that God was always there if the family needed him, “kind of like an extra tube of toothpaste under the sink.” Is that true, or does the family’s religion have a larger effect on the sisters than they claim? How does your own family’s faith, or lack thereof, influence you?

In many ways, the Andreas sisters’ personalities align with proposed birth-order roles: Rose, the driven caregiver; Bean, the rebellious pragmatist; and Cordy, the free-spirited performer. How important do you think birth order is? Do you see those traits in your own family or in people you know?

Father Aidan tells Bean, “Your story, Bean, is the story of your sisters. And it is past time, I think, for you to stop telling that particular story, and tell the story of yourself. Stop defining yourself in terms of them. You don’t just have to exist in the empty spaces they leave.” Do you agree with Father Aidan? Is it possible to identify one’s self not in relationship to one’s siblings or family?

Is it irresponsible of Cordy to keep her baby?

How does the Andreas family deal with the mother’s illness? How would your family have coped differently?

The sisters say that “We have always wondered why there is not more research done on the children of happy marriages.” How does their parents’ love story affect the sisters? How did your own parents’ relationship affect you?

What do you think of the sisters’ father, James? Is he a good parent? What about their mother?

Why do you think the mother is never given a name?

The narrators’ mother admits that she ended up with the girls’ father because she was scared to venture out into the world. Yet she doesn’t seem to have any regrets. Do you think there are people who are just not meant to leave home or their comfort zone?

Bean and Cordy initially want to leave Barnwell behind, yet they remain, while Rose is the one off living in Europe. Do you think people sometimes become constrained by childhood perceptions of themselves and how their lives will be? How is your own life different from the way you thought it would turn out?