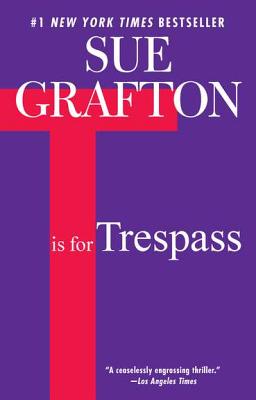 T is for Trespass

Kinsey Millhone's elderly neighbor, Gus Vronsky, may have been the original inspiration for the term “Grumpy Gus.” A miser and a hoarder, Gus is so crotchety that after he takes a bad fall, his only living relative is anxious to find someone to take care of him and get back home as soon as she can.

To help, Kinsey runs a check on the applicant, Solana Rojas. Social security, driver's license, nursing certification: It all checks out. And it sounds like she did a good job for her former employers. So Kinsey gives her the thumbs-up, figuring Gus will be the ideal assignment for this diligent, experienced caregiver.

And the real Solana Rojas was indeed an excellent caregiver. But the woman who has stolen her identity is not, and for her, Gus will be the ideal victim...

“The best and strongest book in the series...Solana is one of the most evil, calculating characters Grafton has created.”—*USA Today

Praise For T is for Trespass: A Kinsey Millhone Novel…

Praise for T is for Trespass

“[A] firecracker of a tale...The masterful last few chapters are among the most frightening and suspensful in the series.”—The Courrier-Journal

#1 New York Times bestselling author Sue Grafton first introduced Kinsey Millhone in the Alphabet Series in 1982. Soon after, both writer and heroine became icons and international bestsellers. Ms. Grafton was a writer who consistently broke the bonds of genre while never writing the same book twice. Named a Grand Master by the Mystery Writers of America, her awards and honors included the Lifetime Achievement Award from the Private Eye Writers of America, the Ross Macdonald Literary Award, the Cartier Diamond Dagger Award from Britain's Crime Writers' Association, the Lifetime Achievement Award from Malice Domestic, a Lifetime Achievement Award from Bouchercon, three Shamus Awards, and three Anthony Awards—including the first two ever awarded. She passed away in December 2017.
Loading...
or support indie stores by buying on
(This book is on backorder)