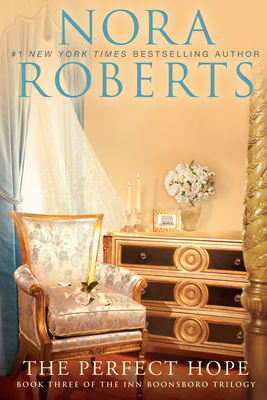 Ryder is the hardest Montgomery brother to figure out—with a tough-as-nails exterior and possibly nothing too soft underneath. He’s surly and unsociable, but when he straps on a tool belt, no woman can resist his sexy swagger. Except, apparently, Hope Beaumont, the innkeeper of his own Inn BoonsBoro…

The former manager of a D.C. hotel, Hope is now where she wants to be—except for in her love life. Her only interaction with the opposite sex has been sparring with the infuriating Ryder, who always seems to get under her skin. Still, no one can deny the electricity that crackles between them…a spark that ignited with a New Year’s Eve kiss.

While the inn is running smoothly, thanks to Hope’s experience and unerring instincts, her big-city past is about to make an unwelcome—and embarrassing—appearance. Seeing Hope vulnerable stirs Ryder’s emotions and makes him realize that while Hope may not be perfect, she just might be perfect for him…

Praise For The Perfect Hope (The Inn Boonsboro Trilogy #3)…

"With stellar pacing, humorous flair, and unerring insight into what makes families tick, Roberts wraps up another winning trilogy."—Library Journal

“Leaves the reader feeling blissfully satisfied yet wishing this romantically paranormal story would go on indefinitely.”—New York Journal of Books

Nora Roberts is the #1 New York Times bestselling author of more than 200 novels. She is also the author of the bestselling In Death series written under the pen name J. D. Robb. There are more than 500 million copies of her books in print.
Loading...
or
Not Currently Available for Direct Purchase