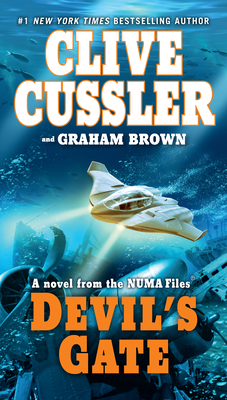 The “spine-tingling adventures” (Chicago Tribune) of Kurt Austin and Joe Zavala continue as the NUMA® crew teams up with a beautiful Russian agent in this #1 New York Times-bestselling series.

NUMA Special Assignment Team leader Kurt Austin, and his right-hand man, Joe Zavala, are looking forward to a submersible race to test out their prototype Barracuda, in an effort to enjoy their own special brand of rest and relaxation.  But then a Japanese cargo ship cruising the eastern Atlantic near the Azores bursts into flames. When a gang of pirates try to take advantage of the disaster, their own boat explodes. And Austin and Zavala find they’ve got no choice but to investigate.

The discovery of ships and planes littered across the sea floor in an underwater graveyard lead the NUMA team to the research of a top scientist, who recently disappeared off the streets of Geneva. Somehow connected to the decades-old defection of a mysterious citizen of the USSR, the scientist’s studies on magnetics may offer answers. But Austin and Zavala will have to seek help from another Russian operative if they are going to find out the truth.

Filled with the high-stakes suspense and boundless invention that are unique to Cussler, Devil’s Gate is one of the most thrilling novels yet from the grand master of adventure.

Clive Cussler is the author or coauthor of over fifty previous books in five bestselling series, including Dirk Pitt®, NUMA® Files, Oregon® Files, Isaac Bell, and Sam and Remi Fargo. His nonfiction works include Built for Adventure: The Classic Automobiles of Clive Cussler and Dirk Pitt, and Built to Thrill:More Classic Automobiles from Clive Cussler and Dirk Pitt, plus The Sea Huntersand The Sea Hunters II; these describe the true adventures of the real NUMA, which, led by Cussler, searches for lost ships of historic significance. With his crew of volunteers, Cussler has discovered more than sixty ships, including the long-lost Confederate ship Hunley. He lives in Colorado and Arizona.

Graham Brown is the author of Black Rain and Black Sun, and the coauthor with Cussler of Devil’s Gate, The Storm, Zero Hour, Ghost Ship, and The Pharaoh’s Secret. A pilot and an attorney, he lives in Arizona.