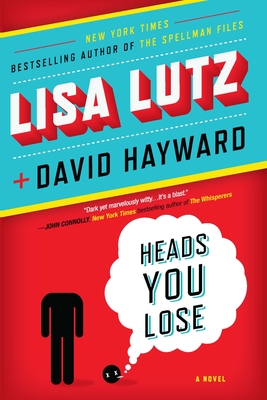 Dave, I just finished the first chapter of a new novel-a real crime novel with a dead body and all-and I thought of you...

Paul and Lacey Hansen are pot-growing, twentysomething siblings sharing a modest rambler of a home in rural Northern California. When they find a headless corpse on their property they can't exactly call 911, so they simply move the body to another location. Let somebody else find it. Instead, the corpse reappears on their land. Clearly, someone is sending them a message, and it's getting riper by the day. But that's only half of the story...

Enter authors Lisa Lutz and David Hayward-former real-life partners (professionally and personally) who have agreed to reunite for a tag- team mystery novel written in alternating chapters. One little problem: they disagree on pretty much every detail of how their novel should unfold. While the body count rises in Paul and Lacey's wildly unpredictable fictional world, so too does the intensity of Lisa and David's rivalry. The result is a literary brawl like no other, and a murder mystery every bit as unanticipated (and bloody).

Lisa Lutz is the New York Times bestselling author of the Spellman comedic crime novels. Since 2007, the Spellman series has received Edgar, Anthony, and Macavity nominations, and each title has been a selection of the Indie Next List. Lutz lives in San Francisco.

David Hayward is a writer and editor in Northern California. His poetry has won a Pushcart Prize and has appeared in Harper's and other magazines. Hayward has an MFA in poetry from the University of California, Irvine. This is his first novel.
Loading...
or support indie stores by buying on