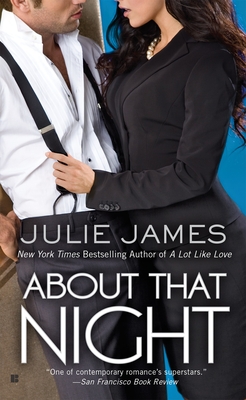 About That Night (An FBI/US Attorney Novel)

From the New York Times bestselling Julie James--a delicious new romance featuring a beautiful Assistant U.S. Attorney who has some unfinished business with a brash billionaire heir.  For fans of Susan Mallery and Rachel Gibson.

HE’S PLAYING GAMES
Though Rylann Pierce tried to fight the sparks she felt for billionaire heir Kyle Rhodes the night they met, their sizzling chemistry was undeniable. But after being stood up on their first date, Rylann never expected to see him again. So when she finds herself face to face with Kyle in a courthouse nine years later, she’s stunned. More troubling to the beautiful Assistant U.S. Attorney is that she’s still wildly attracted to him.
BUT SHE’S MAKING THE RULES
Just released from prison, Kyle Rhodes isn’t thrilled to be the star witness in a high-profile criminal case—but when Rylann comes knocking at his door, he finds she may be the one lawyer he can’t say no to. Still as gorgeous and sharp-tongued as ever, she lays down the law: she doesn’t mix business with pleasure. But Kyle won’t give up on something he wants—and what he wants is the one woman he’s never forgotten. . .

Praise For About That Night (An FBI/US Attorney Novel)…

Praise for Julie James's About That Night:
"James' latest novel is ... filled with fast quips and chemistry that heats up the pages. Readers will love the back-and-forth between the main characters, but throughout the book the rest of the cast of characters and the story is a fantastic romantic comedy. This one would be great on the big screen."-RT BookReviews Magazine (Top Pick)
“ABOUT THAT NIGHT is Julie James’s best book to date! . . . It is utterly enchanting, sensual and fabulous. Julie James gives a robust voice to contemporary courtships! Amusing and sexy, Julie James's books are flirtatious temptations for every reader.”--Romance Junkies

After graduating from law school, New York Times and USA Today bestselling author Julie James clerked for the United States Court of Appeals. She then practiced law with one of the nation's largest firms for several years until she began writing screenplays. After Hollywood producers optioned two of her scripts, she decided to leave the practice of law to write full-time.

Julie's books have been listed on the American Library Association's Reading List for Top Genre Novels, Booklist's Top 10 Romances of the Year, and have been featured as one of Cosmopolitan magazine's Red Hot Reads. Julie's novels also were chosen as the Best Contemporary Romances of 2010, 2011, and 2012 in the All About Romance Readers' Polls. Her books have been translated into fourteen languages and Julie's sixth novel, Love Irresistibly, is now available.

Julie James lives with her husband and two children in Chicago, where she is currently working on her next book.
Loading...
or support indie stores by buying on