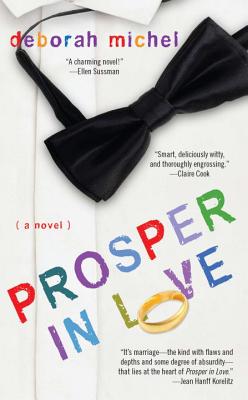 From the start, Lynn and Jamie Prosper were one of those couples who seem meant to be—so content with each other that they barely notice the rest of the world nodding approvingly at their wedded bliss. But sometimes, even in the very best of marriages, all it takes is a mischievous outsider to bring the perfect couple toppling off the top of the wedding cake…
True, Jamie has been working so hard and traveling so much as a young lawyer that he hardly has enough energy to show his devotion. Not that Lynn, a junior museum curator, has any reason to question it. But when Lynn’s old college friend turns up at a cocktail party, chinks in their marriage’s previously unassailable armor start to show.
Suddenly, without meaning to, Lynn and Jamie have both acquired divorce lawyers. And those benevolent onlookers—meddling in-laws and competitive friends alike—eagerly bear witness to each new misstep. Is love really enough to make a marriage last?

Praise For Prosper in Love…

“A charming novel!  Michel writes with intelligence, humor, and grace about the tricky terrain of marriage. The novel is both insightful and very entertaining.” — Ellen Sussman, author of French Lessons

“A richly detailed comedy of modern manners and the ways in which we complicate or own lives.” — Claire Cook, author of Must Love Dogs and Wallflower in Bloom

“Bad behavior, in the hands of a clever novelist, is one of the great pleasures of fiction, and Deborah Michel’s modern day Angelenos are the most satisfying of rakes, snobs and odious in-laws…a social observer of Trollopian gifts." — Jean Hanff Korelitz, author of Admission

Deborah Michel, a former magazine editor and freelance writer, has worked on a long list of publications that includes House Beautiful, Premiere, Los Angeles, and the Los Angeles Times Magazine. She worked as an editor and nightlife columnist for Avenue Magazine, was the west coast correspondent for Spy, and served as a contributing editor at Buzz.
Loading...
or
Not Currently Available for Direct Purchase