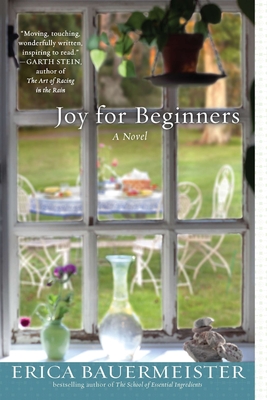 “Kate has conquered cancer, and now she has the goal to ride the white-water rapids in the Grand Canyon. During a celebration dinner, she gives each of her six friends an equally personal challenge. Bauermeister masterfully weaves the stories of the seven women together, allowing the reader to empathize with and root for each one as she jumps her own personal hurdle. A great selection for book clubs!”
— Sam Droke-Dickinson, Aaron's Books, Lititz, PA
View the List

Having survived a life-threatening illness, Kate celebrates by gathering with six close friends. At an intimate outdoor dinner on a warm September evening, the women challenge Kate to start her new lease on life by going white-water rafting down the Grand Canyon with her daughter. But Kate is reluctant to take the risk.

That is, until her friend Marion proposes a pact: if Kate will face the rapids, each woman will do one thing in the next year that scares her. Kate agrees, with one provision—she didn't get to choose her challenge, so she gets to choose theirs. Whether it's learning to let go of the past or getting a tattoo, each woman’s story interweaves with the others, forming a seamless portrait of the power of female friendships.

“Joy for Beginners takes us on the emotional journeys of seven women seeking to transform their lives, and proves that sometimes what we really need to inspire us to change is a good, firm shove.”—Garth Stein, author of The Art of Racing in the Rain


Praise For Joy for Beginners…

Praise for Joy for Beginners

“A joy to read. Bauermeister gives us characters who revel in the best of what life has to offer—loving relationships, fine food, good books, and travel—and she writes with keen observance and wry wit...Readers will be inspired to leap into their own lives with renewed gusto.”—Stephanie Kallos, author of Sing Them Home

“Erica Bauermeister’s prose is evocative and compelling.”—Garth Stein, author of The Art of Racing in the Rain

“Bauermeister has created a cast of textured and nuanced characters who individually and as a group speak to what makes women interesting and enigmatic. Her prose is velvety smooth, revealing life at once mournful and auspicious. Joyful, indeed.”—Library Journal (starred review)

“How transporting to live, even briefly, inside these women’s lives.”—Laura Hansen, Bookin’ it

“Sensual...evocative...A book designed to fill you up and make you hungry for life.”—Publishers Weekly

“Joy for Beginners is ultimately a celebration of life; a literary confirmation of the power of friendship.”—Carol Cassella, author of Oxygen

Erica Bauermeister is the national bestselling author of the The School of Essential Ingredients, The Lost Art of Mixing, and Joy for Beginners. She lives in Seattle with her family.