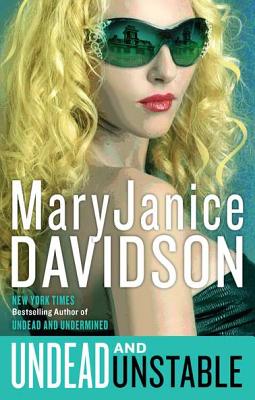 If you re fans of Sookie Stackhouse and Anita Blake, don t miss Betsy Taylor. She rocks ("The Best Reviews") and she's back once again as a vampire queen who finds herself an unlucky (but fashionable) passenger on the road to damnation
Betsy's heartbroken over her friend Marc's death, but at least his sacrifice should change the future "her "future for the better. But it's not as if Betsy's next few hundred years will be perfect. After all, her half-sister Laura is the AntiChrist, Laura's mother is Satan, and family gatherings will always be more than a little awkward.
What's really bothering Betsy is that ever since she and Laura returned from visiting her mom in Hell, Laura's been acting increasingly peculiar. Maybe it's Laura's new job offer: as Satan's replacement down under. Unfortunately, the position comes at a damnable price: killing Betsy, her own flesh-and-blood.
Over Betsy's dead body. And for that matter Marc's, too, since he's not quite as buried as everyone thought. Now a war has been waged one that's going to take sibling rivalry to a whole new level, and a dimension where only one sister can survive.

Praise For Undead and Unstable…

“Her prose zings from wisecrack to wisecrack.”

"No one does humorous romantic fantasy better."

"[She] has her own brand of wit and shocking surprises."