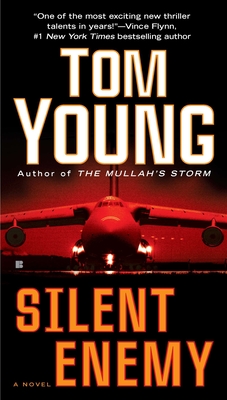 A novel of courage and terror from the author of Sand and Fire and The Warriors...
Estimated time of arrival: Never...
When a terrorist bombing strikes a police training center in Kabul, Afghanistan, many are killed. The wounded, including Sergeant Major Sophia Gold, are loaded onto a C-5 Galaxy bound for Germany. But after takeoff, aircraft commander Michael Parson receives a message: the jihadists have placed bombs on planes leaving Afghanistan—and his is one of them. They are trapped in the air. And if they descend, they will die.As the air­craft deteriorates and the patients grow worse, Parson, Gold, and the crew are pushed to the breaking point—and their biggest challenge has yet to show itself.
For the enemy is already closer than any of them can dare to imagine…
"Fans of Clancy, Coonts, and Dale Brown need to add Young to their must-read lists." (Booklist)

Praise For Silent Enemy (A Parson and Gold Novel #2)…

“There are writers, and there are fighters—readers are lucky that Tom Young is both.” — Alex Berenson, #1 New York Times bestselling author

“Fans of Clancy, Coonts, and Dale Brown need to add Young to their must reads lists.” — Booklist

Tom Young has logged nearly 4,000 hours as a flight engineer for the Air National Guard in Afghanistan, Iraq, Bosnia, Kosovo, and elsewhere, including Latin America, the Horn of Africa, and the Far East. Military honors include two Air Medals, three Aerial Achievement Medals, and the Air Force Combat Action Medal. He continues to serve with the Air National Guard as a Senior Master Sergeant.

He holds degrees from the University of North Carolina at Chapel Hill, and studied writing there and at the Sewanee Writers' Conference, among other places. He is also the author of the oral history The Speed of Heat: An Airlift Wing at War in Iraq and Afghanistan, and contributed to the anthology Operation Homecoming, edited by Andrew Carroll.