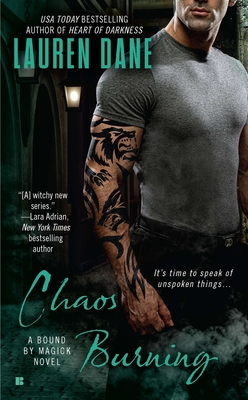 From the “always fabulous Lauren Dane”* comes her new novel of a treacherous family legacy, a temptation just as dangerous, and an evil so depraved it can only be spoken of in whispers…

The life of Lark Jaansen, hunter in Clan Gennessee, has been shaped by violence and unrest—and it defines her future. Well-trained and resilient, she’s met her militaristic match in Simon Leviathan, a warrior not of this world. Locked in mutual admiration, and a desire so hot it burns, Lark and Simon have something else in common: they love the dark, and as a shadow is cast over their world, they’re each coming into their own.

A mysterious war has been waged among the Others. As witches and humans turn against each other, as faes retreat in fear, and as vampires rise, Lark and Simon discover that an unseen force is behind it. A single, hungry entity older than recorded history has returned to gorge on the magick of his victims. He is the Magister, nothing less than the end of time. Finding him is Lark and Simon’s first hope. Surviving him is their last.


Praise For Chaos Burning (A Bound By Magick Novel #2)…

As a stay-at-home mom, Lauren Dane had lots of conversations in a singsong voice but no real outlet for adult thoughts and words. Armed with a secondhand laptop, she decided to “give that writing thing a serious go.”

Seven years and several dozen books later, she’s well aware of her good fortune and is loving every moment of it, even when she has to edit and put Barbie’s dresses back on over and over again.