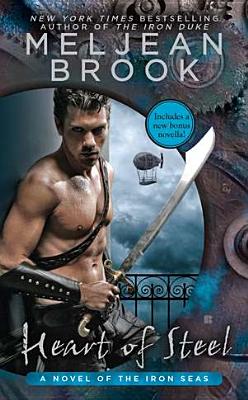 Heart of Steel (A Novel of the Iron Seas #2)

As the mercenary captain of the Lady Corsair, Yasmeen has learned to keep her heart as cold as steel, her only loyalty bound to her ship and her crew. So when a man who once tried to seize her airship returns from the dead, Yasmeen will be damned if she gives him another opportunity to take control.

Treasure-hunter Archimedes Fox isn’t interested in the Lady Corsair—he wants her coldhearted captain and the valuable da Vinci sketch she stole from him. To reclaim it, Archimedes is determined to seduce the stubborn woman who once tossed him to a ravenous pack of zombies, but she’s no easy conquest.

When da Vinci’s sketch attracts a dangerous amount of attention, Yasmeen and Archimedes journey to Horde-occupied Morocco—and straight into their enemy’s hands. But as they fight to save themselves and a city on the brink of rebellion, the greatest peril Yasmeen faces is from the man who seeks to melt her icy heart…

Praise for the Novels of the Iron Seas

“Truly a masterpiece!...This is steampunk at its fun and thrilling best!”—RT Book Reviews

Meljean Brook lives in Oregon with her family. She is the author of the Guardian series and the Iron Seas steampunk romance series.
or
Not Currently Available for Direct Purchase