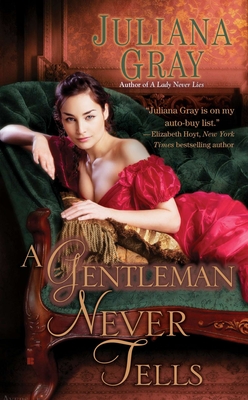 A Gentleman Never Tells (The Affairs by Moonlight Trilogy #2)

Six years ago, Elizabeth Harewood and Lord Roland Penhallow were London's golden couple, young and beautiful and wildly in love. Forced apart by her scheming relatives and his clandestine career, Lilibet and Roland buried their passion beneath years of duty and self-denial, until a chance holiday encounter changes everything they ever knew about themselves...and each other.

But Miss Elizabeth Harewood is now the Countess of Somerton, estranged wife of one of England's most brutal and depraved aristocrats, and she can't afford the slightest hint of scandal to her name. When Roland turns up mysteriously at the castle where she's hidden herself away, she struggles to act as a lady should, but the gallant lover of her youth has grown into an irresistibly dashing and dangerous man, and temptation is only a single kiss away...

Juliana Gray began writing as a child to relieve the tedium of being sentenced to her room, and later turned to romance to relieve the tedium of unsatisfactory suitors. Sadly, despite five years’ residence in the most exclusive areas of London, she never met a single duke, though she once shared a taxi with a future baron. Juliana’s debut romance trilogy, including A Lady Never Lies, A Gentleman Never Tells, and A Duke Never Yields, was largely written when she should have been sleeping. She enjoys dark chocolate, champagne, and dinner parties, and despises all forms of exercise except one.
Loading...
or
Not Currently Available for Direct Purchase