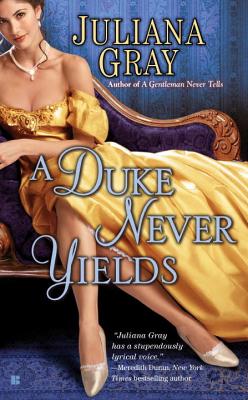 A Duke Never Yields (The Affairs by Moonlight Trilogy #3)

Impatient with the strictures of polite British society, Miss Abigail Harewood has decided to live life on her own terms—and the first thing she requires is a lover. When the commanding Duke of Wallingford arrives on the doorstep of her leased holiday castle, she thinks she’s found the perfect candidate: handsome, dashing, and experienced in the art of love.

But tempting Wallingford into her bed proves more difficult than she imagined. Restless and dissatisfied with his debauched life in London, the formerly rakish duke is determined to spend a year chaste. But as Abigail tries her best to seduce him, Wallingford finds his resolve crumbling in the face of her irresistible charm…and her alluring secrets.

Juliana Gray began writing as a child to relieve the tedium of being sentenced to her room, and later turned to romance to relieve the tedium of unsatisfactory suitors. Sadly, despite five years’ residence in the most exclusive areas of London, she never met a single duke, though she once shared a taxi with a future baron. Juliana’s debut romance trilogy, including A Lady Never Lies, A Gentleman Never Tells, and A Duke Never Yields, was largely written when she should have been sleeping. She enjoys dark chocolate, champagne, and dinner parties, and despises all forms of exercise except one.
Loading...
or
Not Currently Available for Direct Purchase