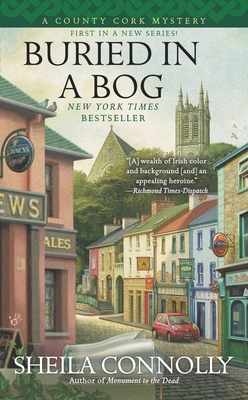 Buried in a Bog (A County Cork Mystery #1)

New York Times bestselling author Sheila Connolly introduces the first novel in the County Cork mystery series—set in a small village in Ireland where buried secrets are about to rise to the surface...

Honoring the wish of her late grandmother, Maura Donovan visits the small Irish village where her Gran was born—though she never expected to get bogged down in a murder mystery. Nor had she planned to take a job in one of the local pubs, but she finds herself excited to get to know the people who knew her Gran.

In the pub, she’s swamped with drink orders as everyone in town gathers to talk about the recent discovery of a nearly one-hundred-year-old body in a nearby bog. When Maura realizes she may know something about the dead man—and that the body’s connected to another, more recent, death—she fears she’s about to become mired in a homicide investigation. After she discovers the death is connected to another from almost a century earlier, Maura has a sinking feeling she may really be getting in over her head...

Praise For Buried in a Bog (A County Cork Mystery #1)…

Praise for Buried in a Bog

“A traditional cozy set in the Emerald Isle and starring an amateur sleuth seems quite fresh. A very promising start to a new series.”―Booklist

“Full of charm and mystery...The locals are warm and welcoming and the central hub of the village, Sullivan's Pub, is a slice of comfort.”―RT Book Reviews

“Connolly’s latest is a captivating tale―sweet, nostalgic, and full of Irish charm, but also tightly plotted and full of twists, turns, and shocking reveals...Connolly’s County Cork Mysteries have a ton of promise.”―The Maine Suspect

Sheila Connolly is an Agatha Award–nominated author, and has taught art history, structured and marketed municipal bonds for major cities, worked as a staff member on two statewide political campaigns, and served as a fundraiser for several nonprofit organizations. She also managed her own consulting company, providing genealogical research services. In addition to genealogy, Sheila loves restoring old houses, visiting cemeteries, and traveling. Now a full-time writer, she thinks writing mysteries is a lot more fun than any of her previous occupations. She is married and has one daughter and three cats.
Loading...
or support indie stores by buying on