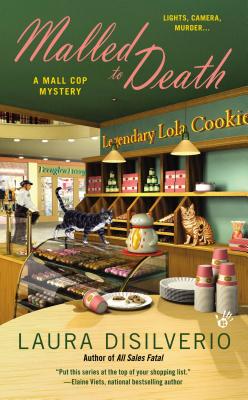 Get ready for a second take.

With a famous action star for a father, mall cop EJ Ferris is used to the Hollywood hullabaloo. But when her mall becomes his movie set, the cameramen aren’t the only ones who start shooting…

Protecting the shoppers at the Fernglen Galleria may not be EJ’s dream job, but neither is working for her father’s film production company. That’s why EJ is less than thrilled when her dad arranges to shoot his upcoming film, Mafia Mistress, in her mall. With the arrival of the movie entourage, EJ suddenly has more than shoplifting teens to worry about.

Bombarded by overeager assistants and fan mail, EJ’s famous father makes for an easy target—especially after a scare involving a gun loaded with blanks. Zoe, the prop master, blames herself for the mistake. But when a real bullet is fired and Zoe is killed, Fernglen Galleria is shaken by more than just Hollywood drama. Cut the cameras—there’s a real gunman on the loose…

Praise For Malled to Death (A Mall Cop Mystery #3)…

“Put this series at the top of your shopping list.”—Elaine Viets, national bestselling author

“One hell of a great novel! This novel will crack you up with DiSilverio’s humor and razor’s-edge wit.”—Suspense Magazine

Laura DiSilverio was born in Georgia and now lives with her husband, two daughters, and dog in Colorado Springs, Colorado.
Loading...
or
Not Currently Available for Direct Purchase