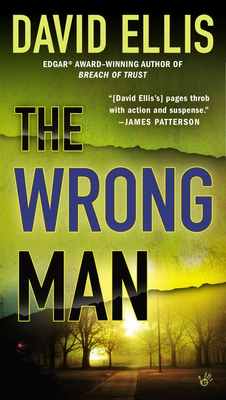 A young paralegal is brutally killed. A homeless Iraq war veteran has been caught with the murder weapon and the victim’s belongings—and he can’t remember what happened…

Jason Kolarich has been asked by the young man’s aunt to defend him. It seems like a standard insanity defense based on Post-Traumatic Stress Disorder—until Kolarich realizes that his client is actually innocent. The victim had been working a case of her own, following a trail of paper and money that connected international terrorists to corporate America, where there are those who want to teach the U.S. government a lesson.

Kolarich knows finding the true murderer is the key to exposing the conspiracy. As time grows short for both his client and thousands of innocent Americans, he races to find a trained killer and uncover the details of the attack. But Kolarich soon discovers that the game has already been rigged—and that he himself is about to become the next target…

Praise For The Wrong Man (A Jason Kolarich Novel #3)…

“David Ellis’s pages throb with action and suspense.” —James Patterson
“Ellis [writes] solid, entertaining, well-crafted novels about crime and passion and greed in the tradition of Scott Turow and John Grisham.” --Chicago Tribune
“Ellis has created an iron-willed, unbreakable character who can take the novelist’s best punch and come back for more.”—Chicago Sun-Times

David Ellis is the coauthor of Guilty Wives, written with James Patterson. His previous thrillers include Breach of Trust, The Hidden Man, Eye of the Beholder, In the Company of Liars, Jury of One, Life Sentence, and Line of Vision, for which he won the Edgar® Award. An attorney from Chicago, he currently serves as counsel to the Speaker of the Illinois House of Representatives, and served as the House Prosecutor who convicted Governor Rod Blagojevich in the impeachment trial before the Illinois Senate.
Loading...
or
Not Currently Available for Direct Purchase