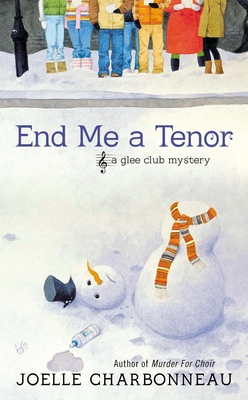 Singing in a production of the Messiah and rehearsing her show choir for a holiday concert may be more than Paige Marshall can Handel. Not only does she have to contend with the overblown ego of world-renowned tenor David Richard, she now has to quickly revamp the show choir’s number, since not one but two other high schools are performing the same song for the quickly approaching competition season.

The tempestuous tenor may have a voice to die for, but when he drops dead during rehearsal after drinking poisoned water, Paige has to compose herself and once again solo as a sleuth to find a killer who’s no choirboy...

Praise For End Me a Tenor (A Glee Club Mystery #2)…

Praise for the Glee Club Mysteries

“Like a little harmony and humor with your homicide? You’ve found your match in Joelle Charbonneau’s Murder for Choir; it’s a heckuva fun read.”—The Maine Suspect

“Imagine if Stephanie Plum joined the cast of Glee, then someone proved more felonious than harmonious.”—Deke Sharon, vocal producer, NBC’s The Sing-Off

Joelle Charbonneau is the New York Times and USA Today bestselling author of the young adult novels Dividing Eden, Need, and the Testing trilogy, as well as the Glee Club mystery series. She is also an entertainer who has performed in a variety of operas, musical theatre, and children’s theatre productions across the Chicagoland area.
Loading...
or
Not Currently Available for Direct Purchase