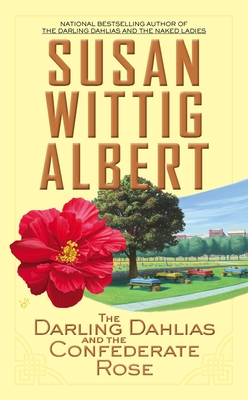 The Darling Dahlias and the Confederate Rose

National bestselling author Susan Wittig Albert returns to small-town Darling, Alabama, in the 1930s—and the Darling Dahlias, the ladies of a garden club who aren’t afraid to get their hands dirty solving mysteries…

Just in time for the Confederate Day celebration, the Darling Dahlias are ready to plant Confederate roses along the town cemetery. Of course the plant is in fact a hibiscus.

The Confederate rose is not the only thing that is not what it first appears to be. Earle Scroggins, the county treasurer, has got the sheriff thinking that Verna Tidwell is behind a missing $15,000. But Darling Dahlias president Liz Lacy is determined to prove Verna is not a thief.

And club member Miss Rogers has discovered a secret code embroidered under the cover of a pillow that belonged to her grandmother. With missing money, mysterious messages, and the strange behavior of one resident, Darling, Alabama, on the eve of Confederate Day, is anything but a sleepy little town...

Praise For The Darling Dahlias and the Confederate Rose…

“[Susan Wittig Albert], a master of the cozy mystery, fills her novels with vibrant local color that evokes a distant time and setting.”—Richmond Times-Dispatch

Praise for the Darling Dahlias series:

“[Albert] hits all the right notes…The plot’s believable, the Southern color brims with authenticity, and the characters are charmingly and realistically drawn...Here’s hoping the ladies have many more opportunities to dig into crime.” —Richmond Times-Dispatch

“The author of the popular China Bayles mysteries brings a small Southern town to life and vividly captures an era and culture—the Depression, segregation, class differences, the role of women in the South—with authentic period details. Her book fairly sizzles with the strength of the women of Darling.” —Library Journal

Susan Wittig Albert grew up on a farm in Illinois and earned her Ph.D. at the University of California at Berkeley. A former professor of English and a university administrator and vice president, she is the author of the China Bayles Mysteries, the Darling Dahlias Mysteries, and the Cottage Tales of Beatrix Potter. Some of her recent titles include Widow’s Tears, Cat’s Claw, The Darling Dahlias and the Confederate Rose, and The Tale of Castle Cottage. She and her husband, Bill, coauthor a series of Victorian-Edwardian mysteries under the name Robin Paige, which includes such titles as Death at Glamis Castle and Death at Whitechapel.
Loading...
or
Not Currently Available for Direct Purchase