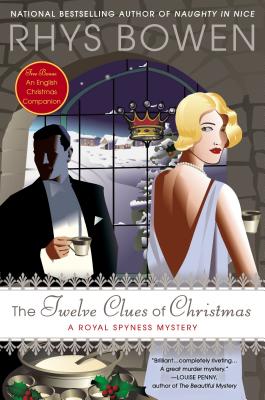 The Twelve Clues of Christmas

She may be thirty-fifth in line for the throne, but Lady Georgiana Rannoch cannot wait to ring in the new year before a Christmas killer wrings another neck
On the first day of Christmas, my true love gave to me well, actually, "my "true love, Darcy O Mara, is spending a "feliz navidad" tramping around South America. Meanwhile, Mummy is holed up in a tiny village called Tiddleton-under-Lovey with that droll Noel Coward And I m snowed in at Castle Rannoch with my bumbling brother, Binky, and sourpuss sister-in-law, Fig.
So it's a miracle when I contrive to land a position as hostess to a posh holiday party in Tiddleton. The village is like something out of "A Christmas Carol" But no sooner have I arrived than a neighborhood nuisance, a fellow named Freddie falls out of a tree, dead . Dickensian, indeed.
Freddie's merely a stocking stuffer. On my second day in town, another so-called accident turns up another mincemeat pie and yet another on my third. The village is buzzing that a recent prison break could have something to do with it that, or a long-standing witch's curse. I m not so sure. But after Darcy shows up beneath the mistletoe, anything could be possible in this wicked wonderland.


Praise For The Twelve Clues of Christmas…

Praise for The Twelve Clues of Christmas

“The Twelve Clues of Christmas is yet another brilliant novel from Rhys Bowen.... Like all of Rhys’s books, this is so much more than a murder mystery. It’s part love story, part social commentary, part fun and part downright terrifying. And completely riveting. I adore this book and can hardly wait to give it to all my family and friends for Christmas! For all who love the season, and a great murder mystery, this book is perfect.” —Louise Penny, author of The Beautiful Mystery

Praise for the Royal Spyness Mysteries:

Rhys Bowen has been nominated for every major award in mystery writing, including the Edgar(r), and has won many, including both Agatha and Anthony awards. She is also the author of the Molly Murphy Mysteries set in turn-of-the-century New York, and the Constable Evans Mysteries set in Wales. She was born in England and lives in Northern California.
or
Not Currently Available for Direct Purchase